We left Yuma in mid-March to be closer to the Phoenix area.   A change of scenery has been good for the mind and soul.  Our plans to go to Alaska this summer have once again been pushed into next year, and we will be heading back to work at Luton’s Teton Cabins in May.  With all that has happened in the past year, we feel very fortunate to have options.

A year ago, the “talk in the RV park” was about toilet paper – what places had it, and how much could you get!  Today, the “talk” is all about vaccinations – what places have it, and what shot did you get?  So we have come a long way with COVID!  And…we were able to get the Pfizer vaccine.  We are both fully vaccinated, having both shots 21 days apart.  If you are a side sleeper like me, I recommend not getting the shot in the arm you sleep on.  I made this mistake, and had a very sore arm for several days after the first shot.  The 2nd shot I had in my other arm, and had no problems.  We also drank a lot of water the day before, day of, and day after the shot.  This was one piece of advice we received from many people that had side effects – stay well hydrated. 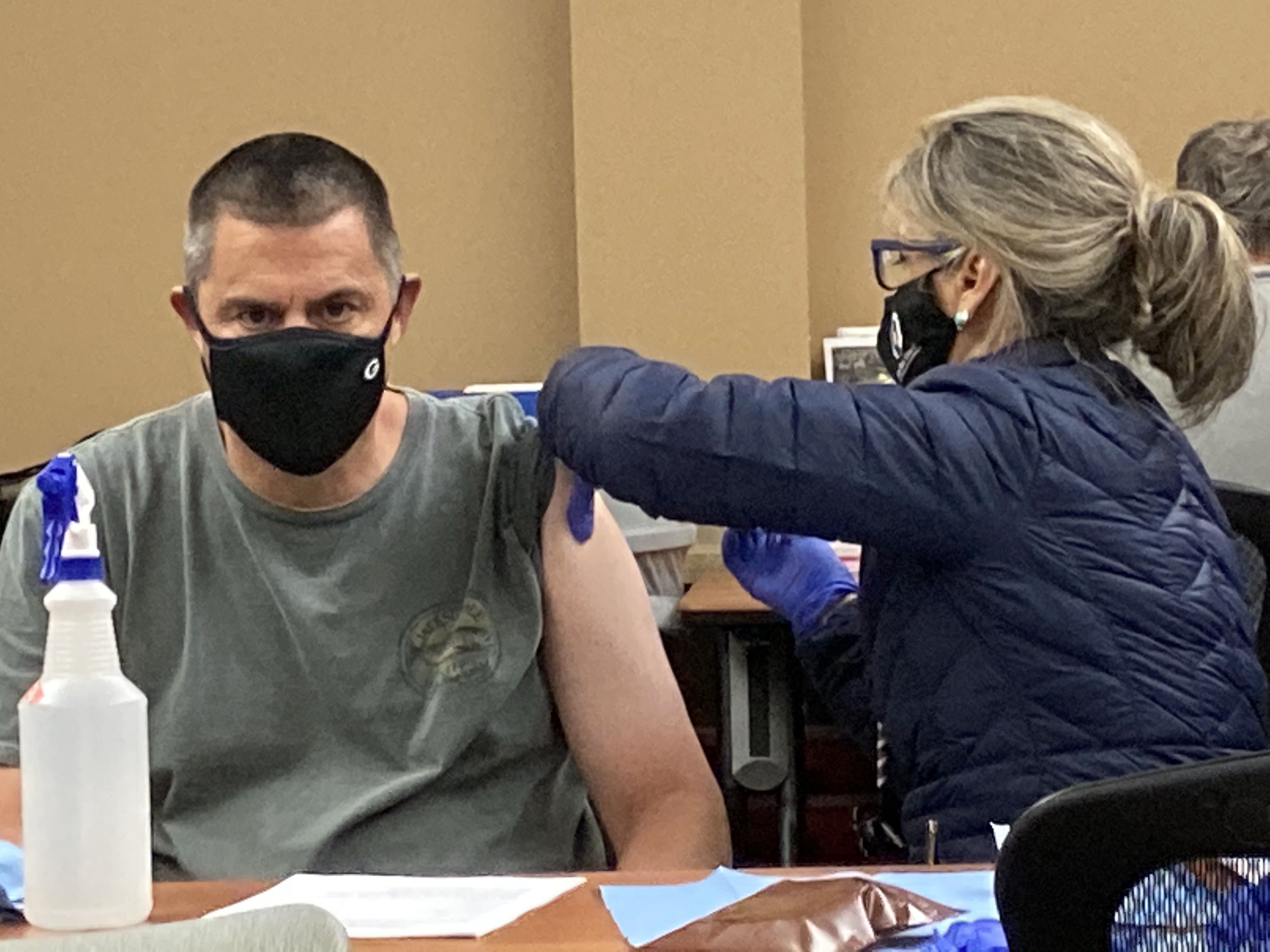 It’s been a long time since I was able to get a new stamp in my National Parks Passport Book, as we have avoided large crowds for the past year.  After Yuma, we stayed in Casa Grande, AZ for two weeks, and met up with our friends Forrest and Mary.  Besides a few delicious lunches with them, we went to visit Casa Grande Ruins National Monument with them.  Currently, the park is waiving admission fees, as they have limited services.  The movie and museum buildings are closed, and the bookstore only allows a few people in at a time. But since the Ruins are all outdoors, it is still worth a visit.  The Monument is dog friendly, and has plenty of parking if you are travelling in an RV. 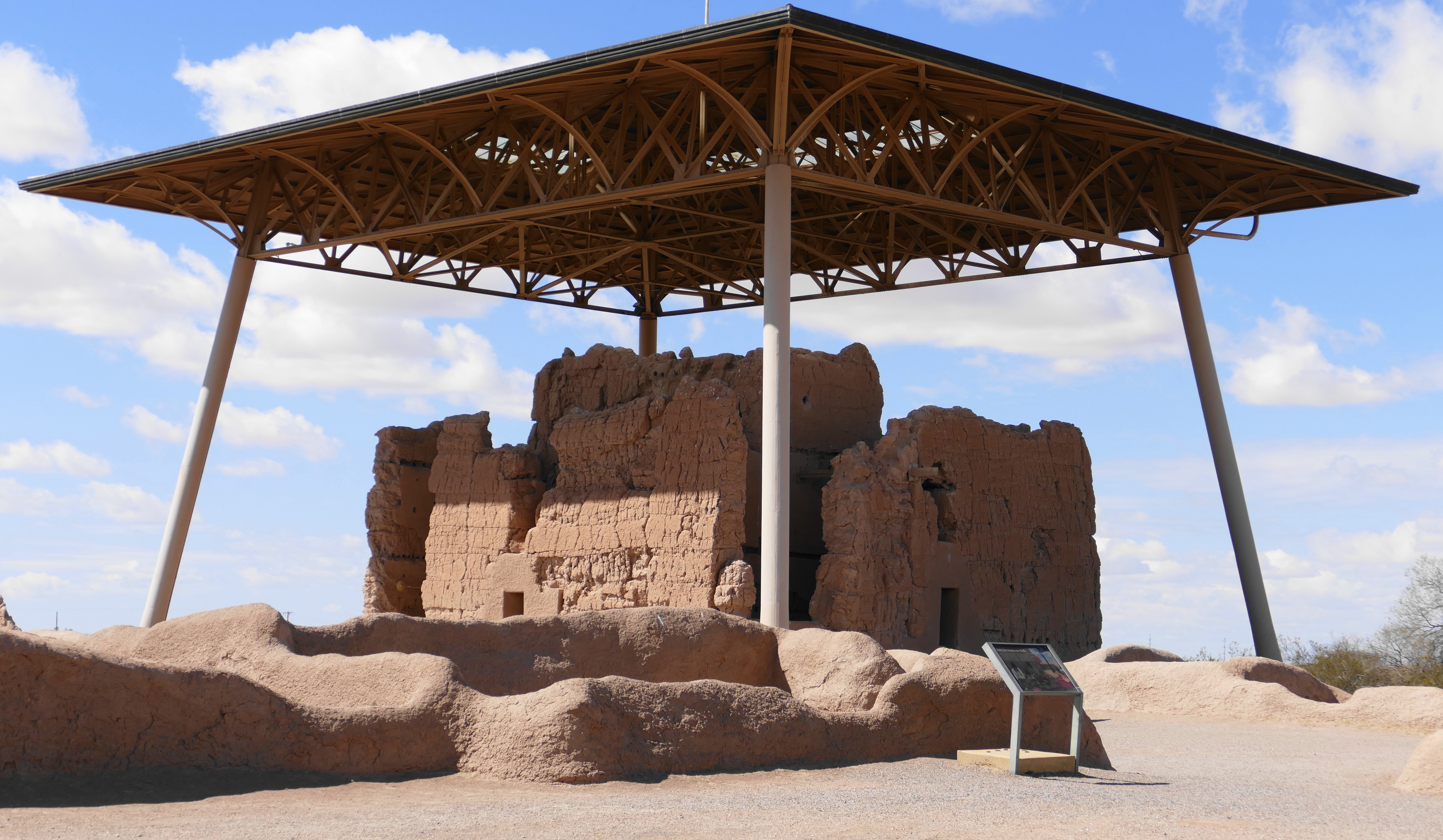 It is believed this structure was built about 700 years ago, by the Ancestral Sonoran Desert People.  They used caliche, a desert soil rich in calcium carbonate, mixed it with water, which formed a concrete like substance.  It was early Spanish explorers that first documented the ruins, and named it Casa Grande, meaning Great House.  It is four stories high, and 60 feet long, and the walls face the four cardinal points of the compass.  Openings in the walls align with the sun and the moon at specific times. 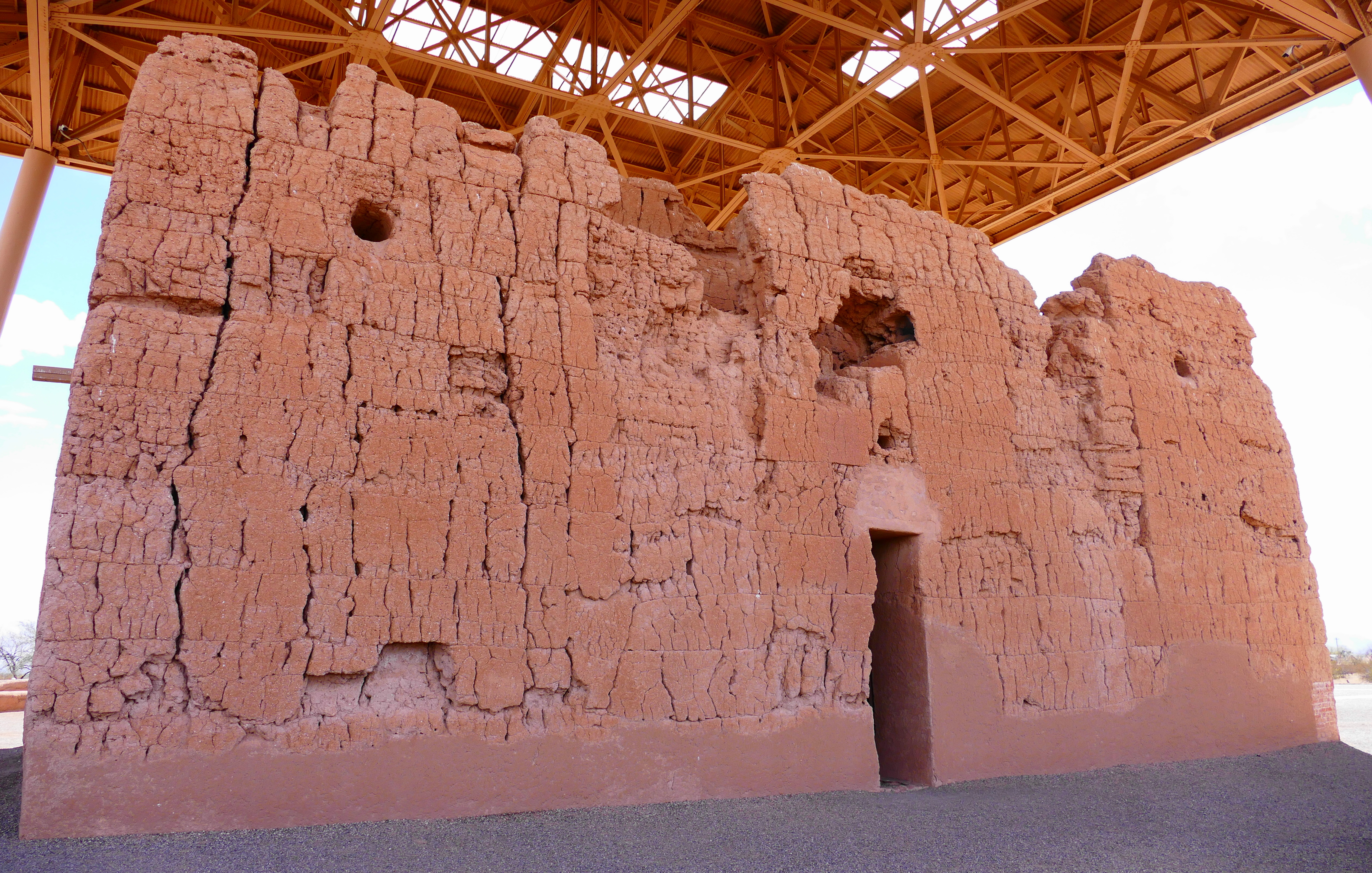 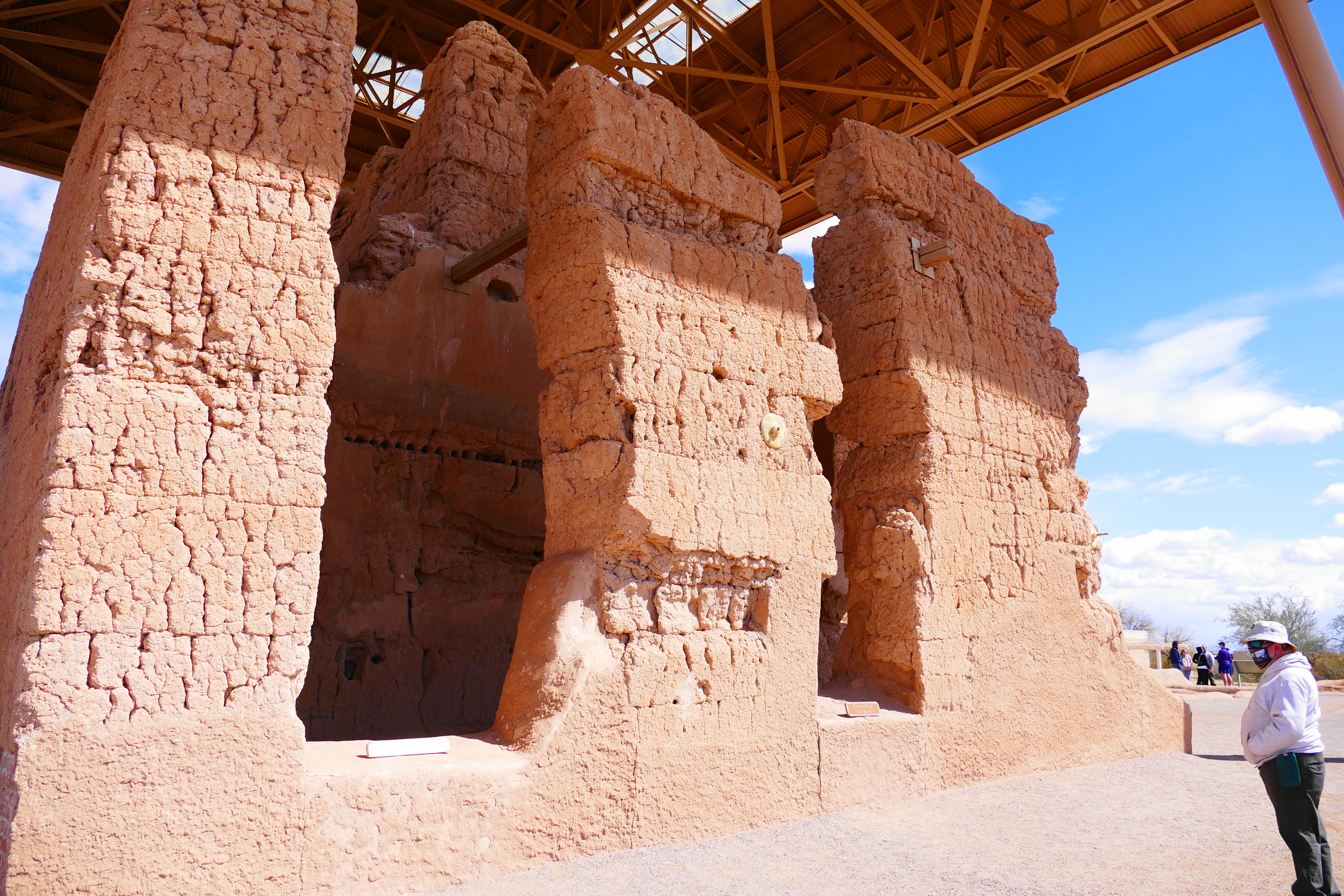 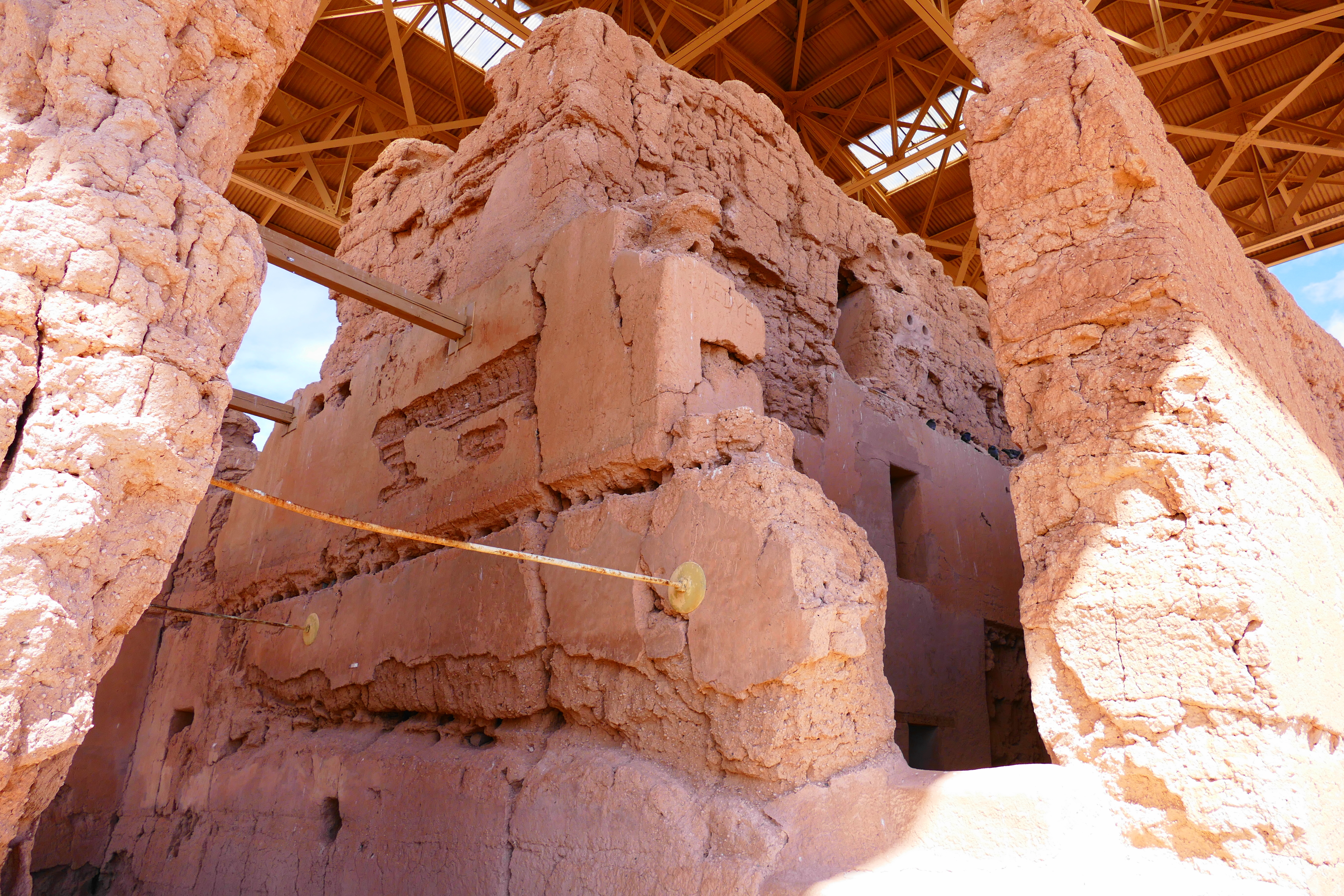 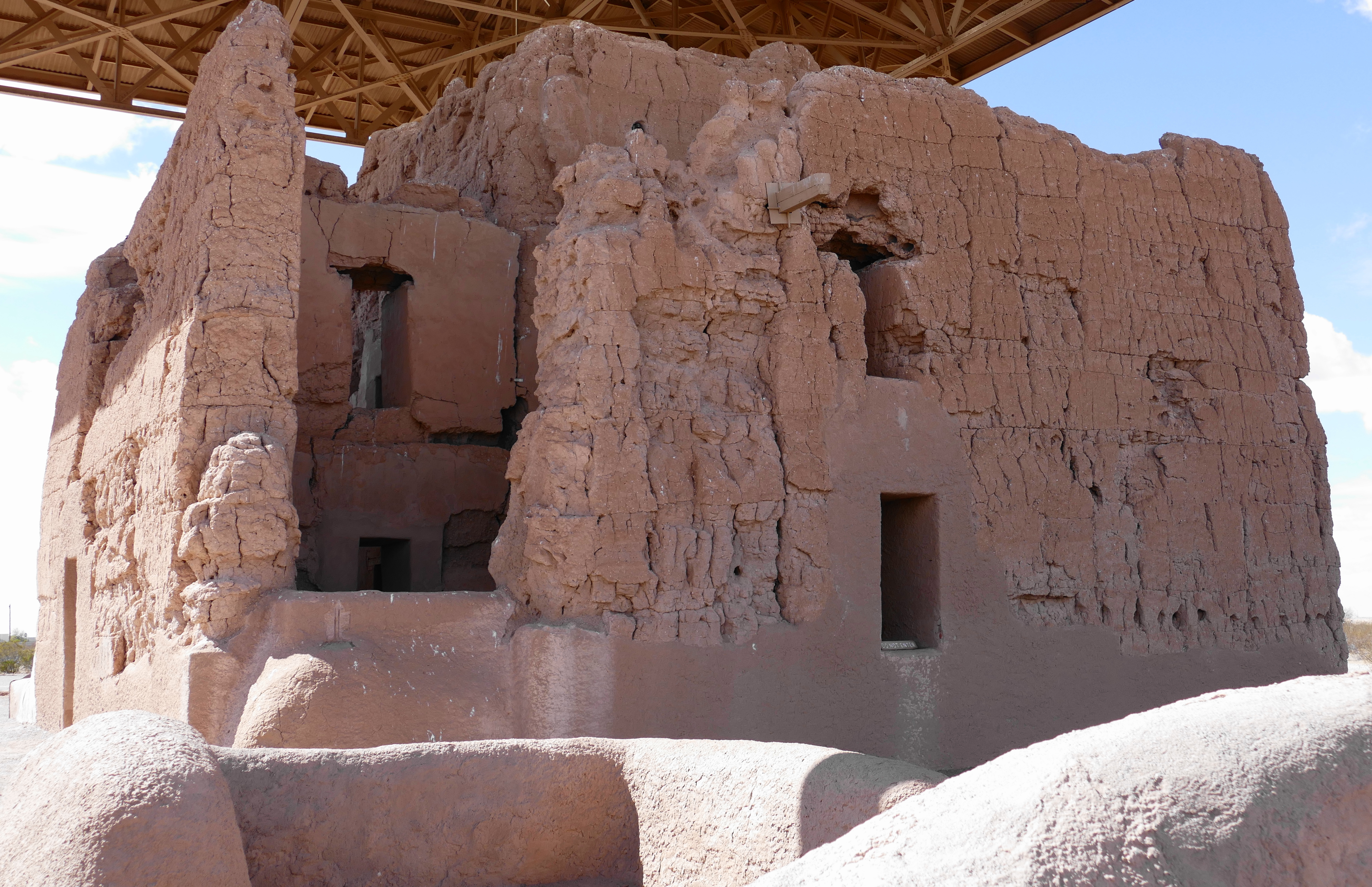 You cannot enter the ruins, due to it’s instability. A lot of birds seem to call this place home now, so it’s covered in droppings. I don’t know what type of bird this is. It’s like a morning dove, but blue/gray in color. There were dozens of these taking up residence in the ruins. 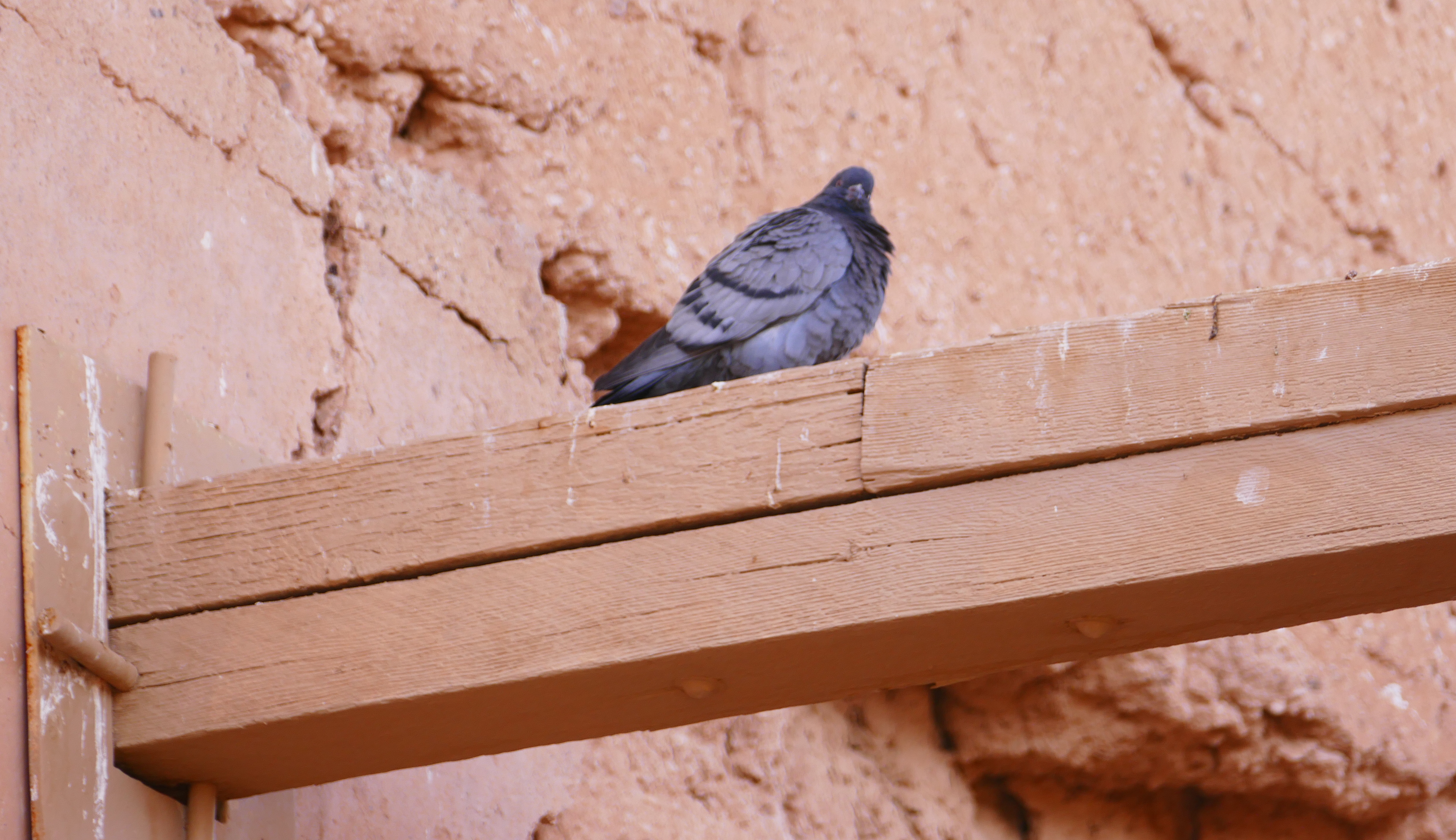 In 1889, Congress decided to protect the Casa Grande Ruins.  The wooden beam that the bird is resting on, was installed in 1891 to protect the walls.  In 1894, the Ruins became the nation’s first archeological preserve.

After Casa Grande, we have moved over to the Gold Canyon area, east of Phoenix.  It’s a quiet, but growing area.  The park we are in has done a nice job of handling COVID while still allowing the residents to have some fun.  They bring in local bands, but have the bands play outdoors. For food options, they have local food trucks come in as well.  A good time was had by all! 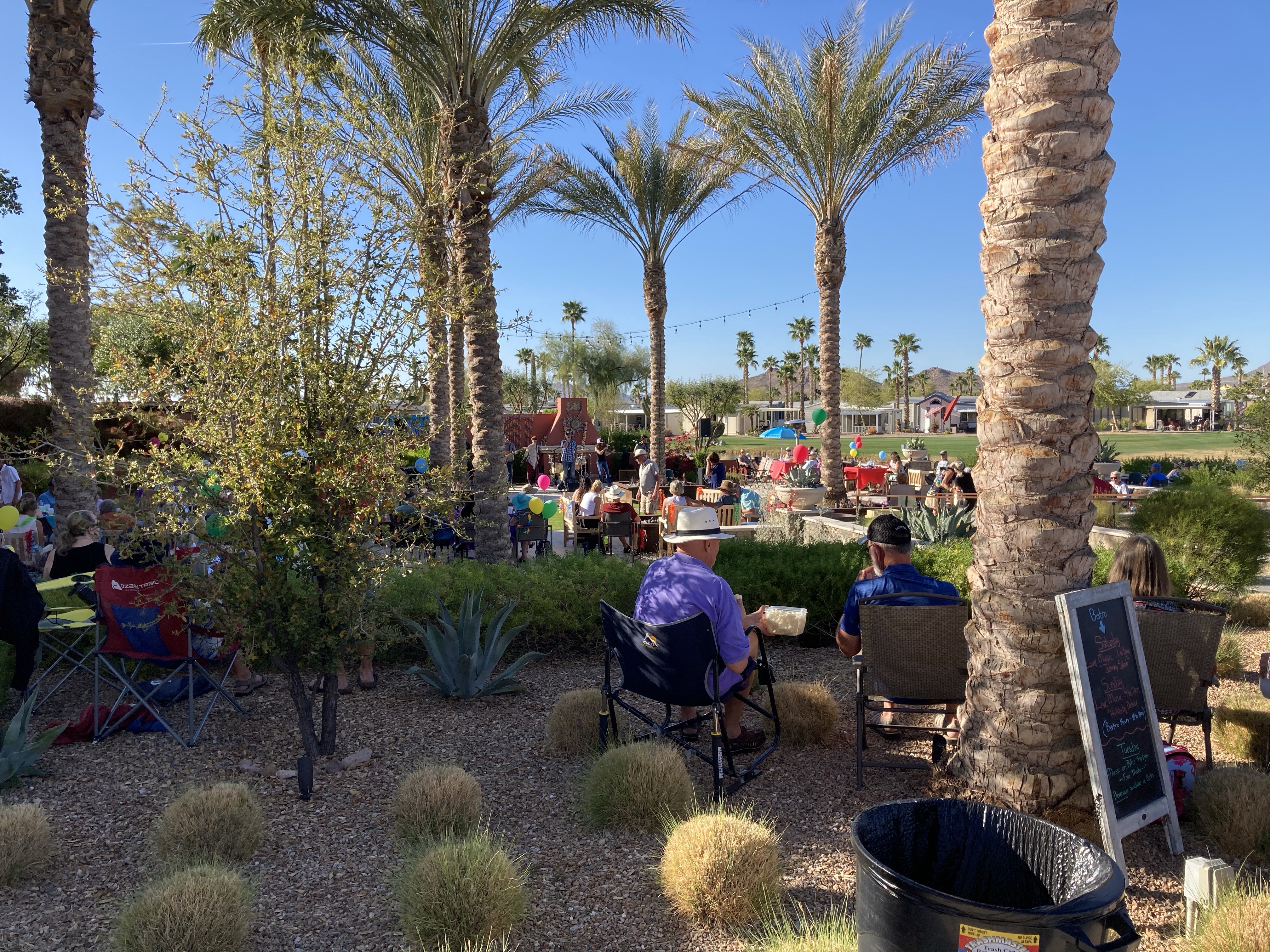 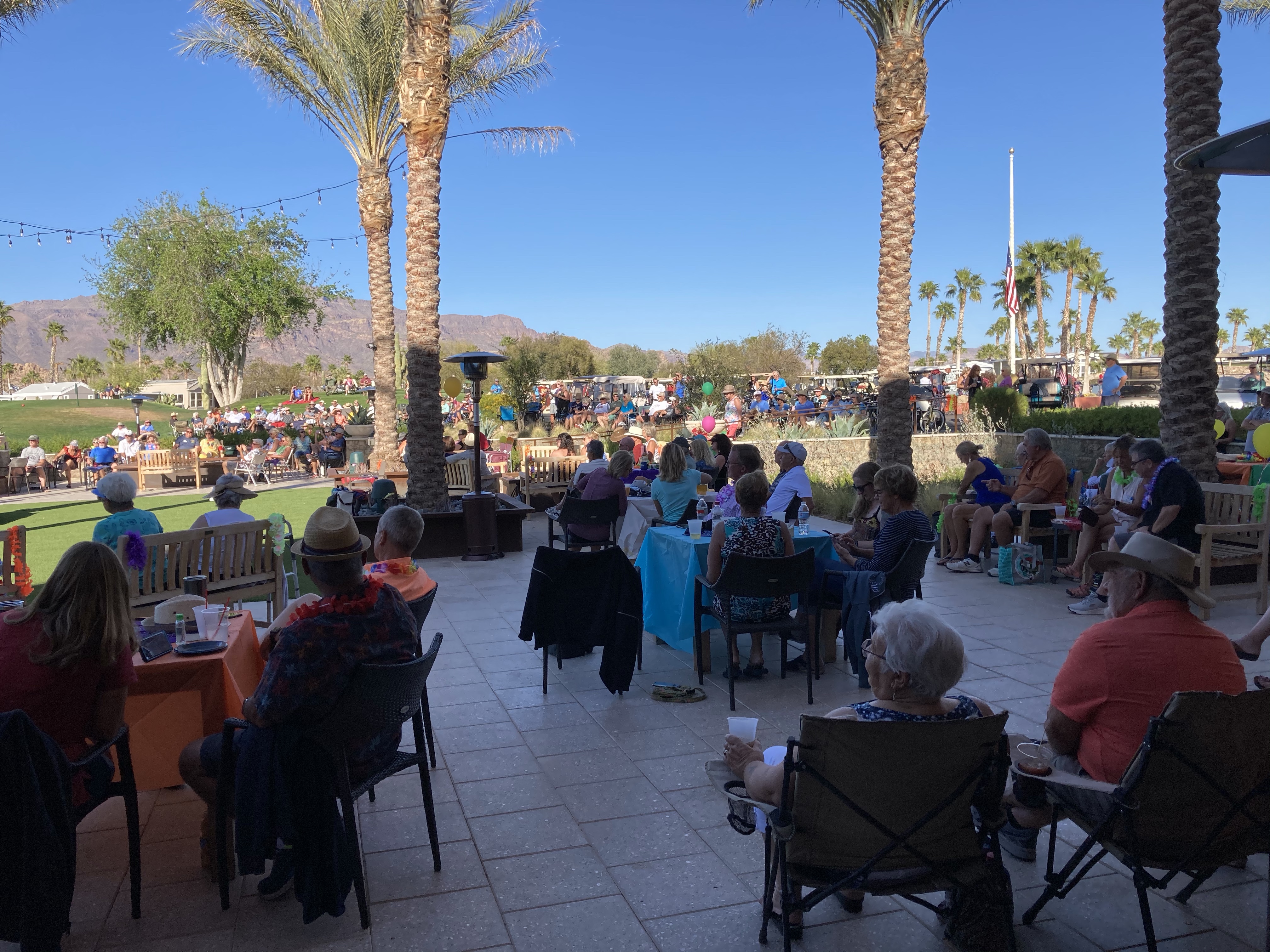 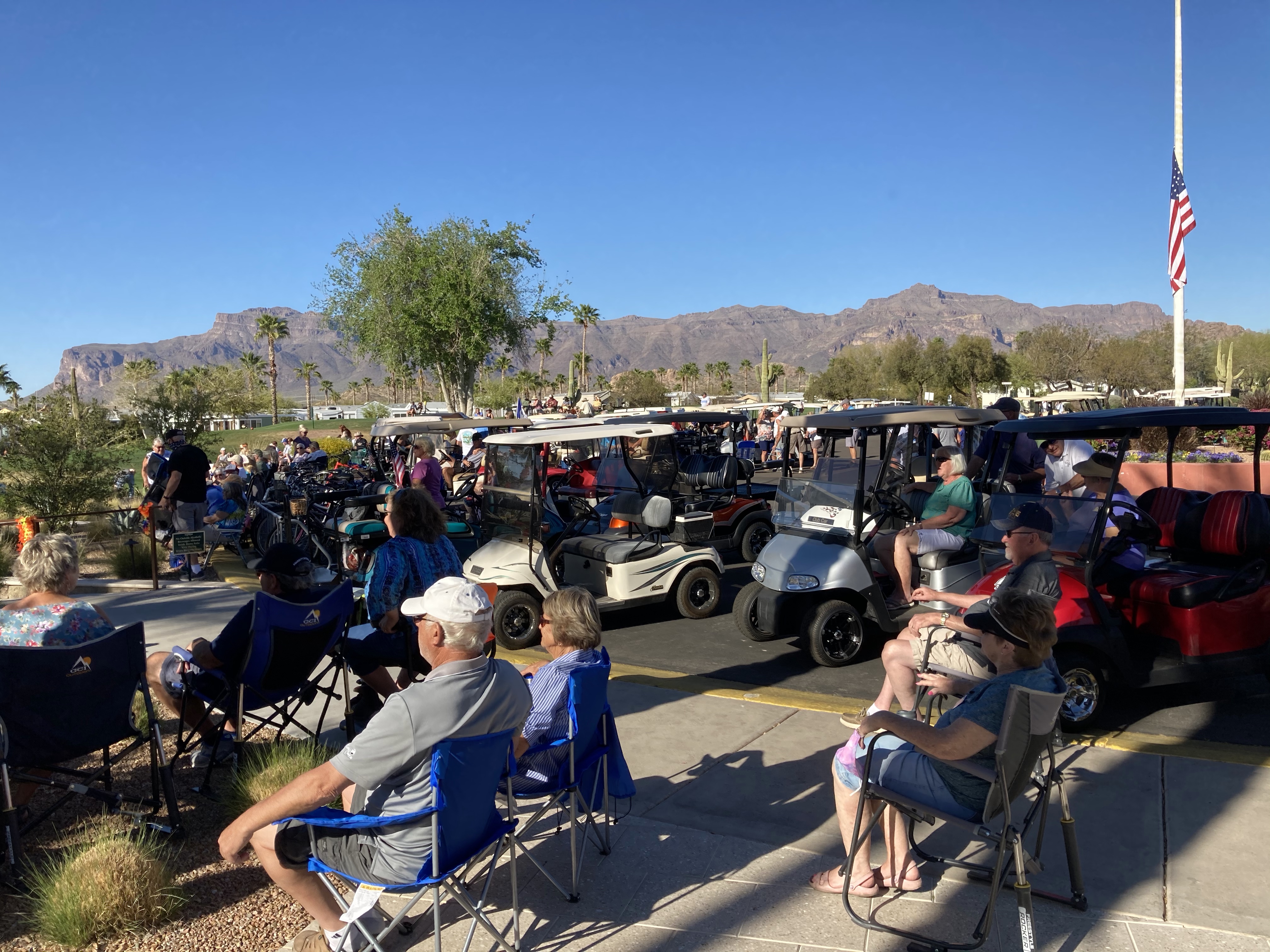 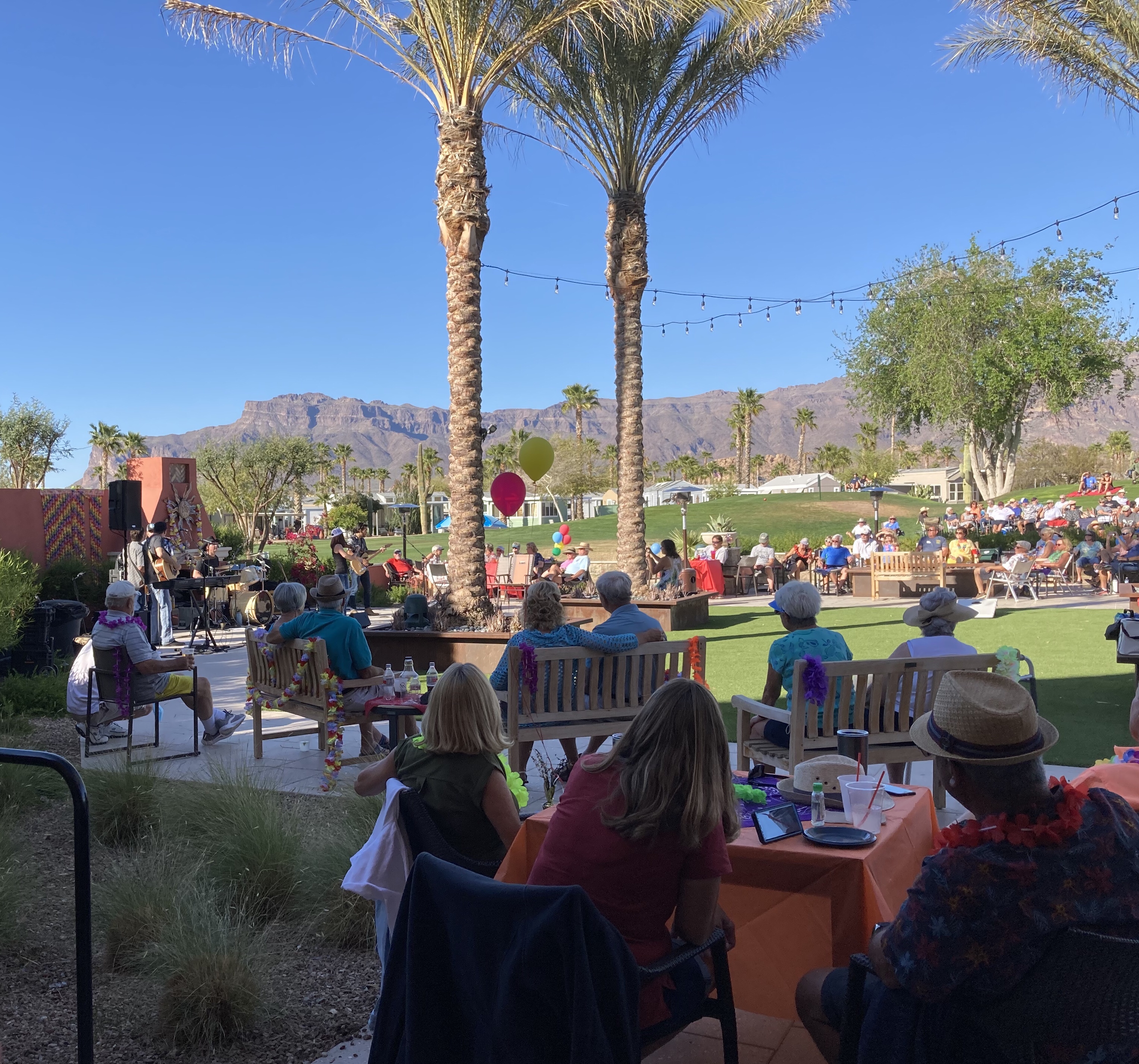 You can have fun, support local bands/business, and socially distance/stay safe! Lots of good food options…

And did I mention the Cupcake Truck?! Yes, we have been trying to eat healthier, but life is better with a cupcake (or two!). And these cupcakes were the best we have had.

Our friends Tom and Ellen traded in their fifth-wheel and purchased a new travel trailer. They had bought a park model in Yuma, but still plan on travelling in the summer months. So this was a good option for them to “downsize.” They spent a few days visiting with us, to test out all the features before heading back to Yuma. It was good to see them, and their new home on wheels.

We have also been able to spend a little bit of time visiting with our niece Jasmine, who lives about an hour from here.  We spent half a day apartment shopping with her, and I was glad that masks were required to visit the apartments.  It seems their idea of sanitizing the apartments is to heavily spray air freshener in the models.

We have a few weeks left before we slowly make our way north for the summer, with what will be another very busy season for the National Parks.   Take care everyone!

Quote for the day:  “You’re only human.  You live once, and life is wonderful, so eat the damned red velvet cupcake.” – Emma Stone

"To never take that first leap is the biggest failure many of us make"
Loading Comments...
Comment
×