We have decided to take a break from distillery tours, since some others venues have now opened back up.  Thursday we drove up to Fort Knox, Kentucky to see the General George Patton Museum of Leadership (cost: free).  This is the Army’s only museum dedicated to the history of Army leadership at all levels.  It was first opened in 1949 as the Patton Museum of Cavalry and Armor and was in operation until 2010.  Many of the tanks have since been moved to Georgia, and the museum is currently undergoing a transformation with the new leadership format.  There are many exhibits that are still under construction.  Probably by next year, it will be completed.  Regardless, it was well worth a visit. The museum covers Army history from 1775 right up to the Afghanistan and Iraq wars.  It is also the first museum we have visited that encourages you to bring in your smart phone or tablet device.  They have free Wi-Fi, and encourage you to download the museums app.  There are multiple spots where you can scan a code into the smart-phone, and it will provide additional information and videos on the display that is in front of you. 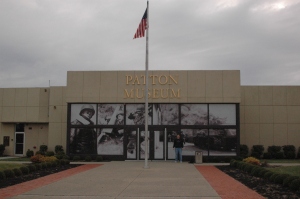 They do have a few tanks remaining outside the museum. 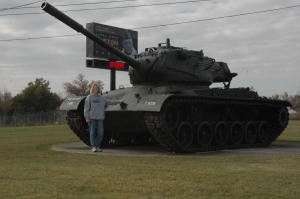 They also have Armor Memorial Park outside, and this monument caught my attention, as it had a wreath by it.  It was honoring the F Force troop in Vietnam.  My two older brothers served in Vietnam, thank you Greg and Jerry.  And thank you to all our veterans.

General George S. Patton, Jr. (born 1885), came from a military family, and attended both the Virginia Military Institute and West Point.  He worked his way up through the ranks and had 438,000 GI’s under his command in the Third Army in WWII. 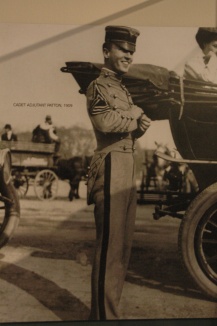 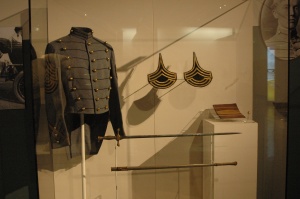 Patton, as a Lieutenant, participated in the pentathlon in  Olympics in Stockholm, Sweden in 1912.  After the Olympics, he studied with the French Cavalry and is credited with designing the M1913 cavalry saber.  The design became known as the “Patton Saber” and was effective at piercing an opponent.  It was the last saber issued by the Army.  Below is a photo of the saber, along with a toy wooden saber that Patton played with as a child.

Patton purchased a Colt 45 revolver in 1916 in Texas, and carried it with him until his death in 1945.  This revolver was designed in 1872, and was the standard issue service revolver used by the Army until 1892. 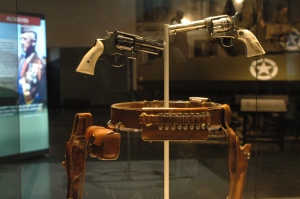 Who knew Patton was an RV’er??!!  This was his quarters that he lived in when he was out with the troops.  Patton was loved by his soldiers because he stayed with them, unlike other Generals that would stay in hotels.  Patton believed an effective leader needs to be out front with his soldiers. 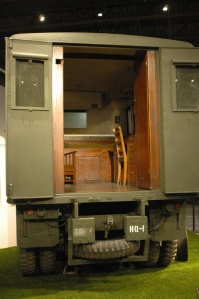 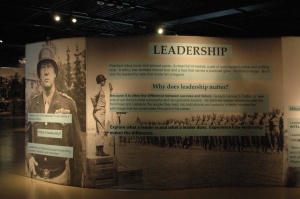 Below is a photo of the restored 1938 Cadillac Limousine, Series 75, that was given to him in 1945 by his troops after it was seized from the Nazi’s.

On Sunday, December 9, 1945, General Patton was riding in the back seat, heading out for a pheasant hunt when his driver, a private first class struck a truck that turned in front of them.  Patton was thrown forward and struck his head on the glass divider, which fractured his neck and paralyzed him.  Patton was hospitalized, and ordered that no investigation be made of the accident, as he did not want any discipline to occur of either driver.  The museum displays part of his hospital records.  He was reported to be improving, but 12 days after the accident his vitals rapidly declined and he passed away from a pulmonary embolism (blood clot in his lung).  Patton was only 60 years old when he passed away.

The museum has a large collection of weapons.

Coach T your dad could add this one to his collection!

Hanging with the tank guys

They also had a small recognition of General Colin Powell, and listed his 13 rules to live by.  I think we should all follow these (you may need to double-click on this photo to read all of them).

The newest exhibit at the museum, which arrived on September 11, 2013 and is still under construction, is a fire truck from the US Army that was on duty at the Pentagon on 9/11/2001.  The truck was damaged during the attack on the Pentagon. 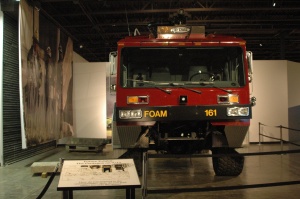 US Army Foam 161 was on duty at Pentagon 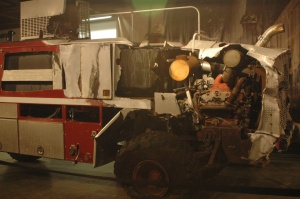 We will definitely return to this museum, as it is only going to improve as it develops more exhibits.

Quote for the day: The  test of success is not what you do when you are on top. Success is how high you bounce when you hit bottom. – George S. Patton