Dan’s brother Gary, wife Julia and youngest daughter Jasmine flew down from frigid Minnesota and Iowa for a “Spring Break” and some sunshine.  They are staying just up the road in New Smyrna Beach, where Dan’s parents rent a condo for a few months to also escape the cold and snow.

While we were at the condo, Dan noticed a familiar site in the sand.  Can you guess what this is?  Hint, it was on March 14th….. 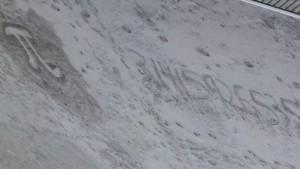 Yes, some creative math geeks spent their day on the beach making the “Pi” symbol, and wrote out a decimal approximation for Pi.  Spring Break gets pretty wild in New Smyrna Beach!!

Dan was able to dust off the golf clubs and golf with his parents and brother last Friday.  Julia and I joined the foursome later for a delicious dinner (we had to do the “early bird special” of course!).  Saturday we had a quiet family day, with a long walk on the beach.  Unfortunately, Dan and I both ended up with multiple blisters on the bottom of our feet from the hot sand (yes, I know those of you still wearing winter boots have no sympathy for us!).   Dan’s mom fixed a delicious dinner and fresh strawberry pie, and we had a competitive card game of ‘hand and foot’, which the guys won.  Sunday Dan and I just rested our very painful feet!

Monday (3/17)  we again got together for dinner and cards, and Jasmine flew in late that night.  On Wednesday, Gary, Julia and Jasmine joined Dan and I down in Cocoa Beach, on a 2 hour Kayaking Tour on the Indian River, with Island Time Kayaking.  We had seen this tour offered on Groupon, and the price ($25.00 for 2 people) was right.  Neither of us had ever kayaked before, and we both wanted to try it out.

We all agreed that the kayaking was a lot of fun, but the “tour” was rather lacking.  We would not recommend this tour company for kayaking.  Part of the problem was the location, and the other was our tour guide.  Despite the tour company’s advertising manatees, dolphins, and 300 species of birds, we saw 2 birds during the 2 hours.  Our tour guide was lacking in customer service skills (we shouldn’t have to ask him what his name is), and really seemed dis-interested in the tour.  Our first stop on our “tour” was to look at an old fence post that previously marked the border of the Kennedy Space Centers property.  We stared at it while he went on about how the tug boats and cargo ships pollute the water.  He spent about 20 minutes giving us his views on healthcare, and people who have purchased a trip to Mars. Then he paddled off to go check out a new boat that was on the dock by Sea Ray, and with 30 minutes left in the tour, he paddled back in and told us we had 30 minutes to ourselves to do what we wanted!

We certainly would love to go kayaking again, and may look into one of the inflatable Sea Eagle Kayaks that many RVers have and love.  You can certainly get a nice workout when paddling upstream!  And we have seen many photos from other blogs of nicer places in which to kayak in!  It was a very relaxing time. 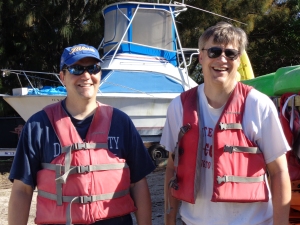 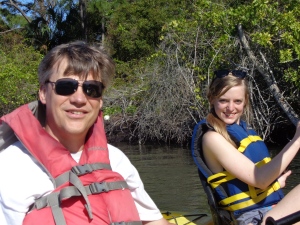 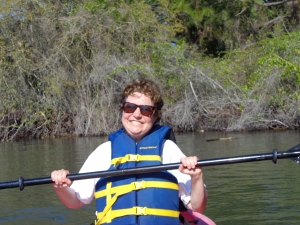 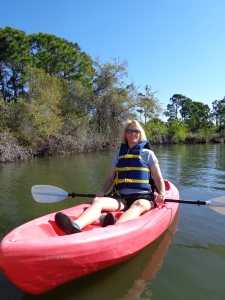 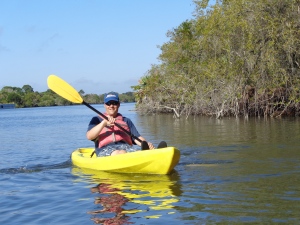 Dan getting a workout

This is the new yacht that Sea Ray is apparently testing out, according to our tour guide. 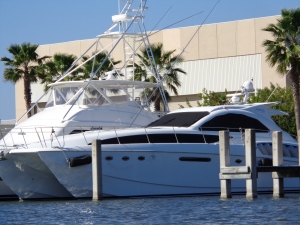 The two birds that we saw on our tour. 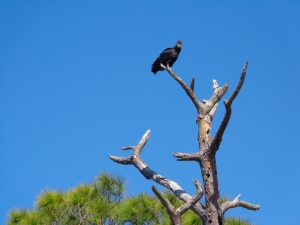 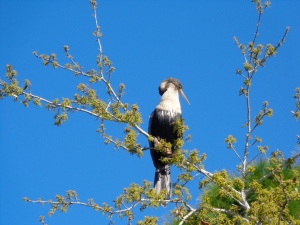 After our tour, we headed down to Cocoa Beach, to catch whatever rays would soak thru our Broad Spectrum SPF 50 lotion!  There were many families and spring breakers enjoying the beach.  We discovered a nice restaurant right on the beach, where we had a great dinner, and some tasty “foofy” frozen drinks! 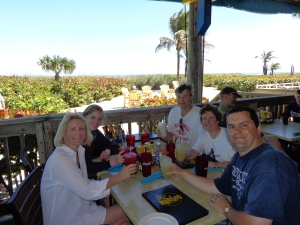 Quote for the day:  “The mark of a successful man is one that has spent an entire day on the bank of a river without feeling guilty about it.” – Chinese Philosopher

7 thoughts on “Kayaking and family time”