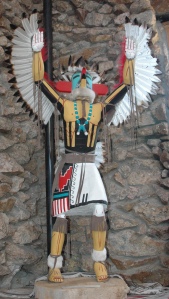 As promised in my last blog, I would provide some history on Crazy Horse Memorial, where we will be working this summer.   Korczak Ziolkowski was born in Boston, and resided in Connecticut. In 1939 he came out to the Black Hills to work as an assistant to Gutzon Borglum, who was in charge of carving Mount Rushmore National Memorial. Korczak was fired from the job, and the letter from Borglum is on display at Crazy Horse Memorial.

Korczak went back home and worked on a sculpture, Paderewski: Study of an Immortal, which won first prize for sculpture at the New York World’s Fair in 1939. Lakota Chief Henry Standing Bear invited Korczak to carve Crazy Horse Memorial, and wrote “My fellow chiefs and I would like the white man to know the red man has great heroes, also.” Korczak did meet with the Chiefs in 1940, and began studying Crazy Horse and the Native American culture.

There is a photo of Korczak meeting with Chief Standing Bear in the museum.

Korczak and the Chief

From 1943 – 1945, Korczak volunteered for service in WWII, and accepted the Indians invitation after the war ended. He used his own money to purchase the land in the Black Hills and he starts building a log home on the property in 1947. He had several volunteers helping, among them Ruth Ross, who came from his home state of Connecticut.

June 3, 1948 the first blast occurred on the mountain. Korczak promised the memorial would be a non-profit project, and he would never take a salary or government funding. This is a photograph of what the mountain looked like in 1948. 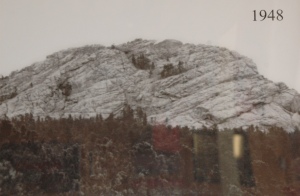 And some photos over the years:

By 1993, work had switched to focus on the head of Crazy Horse, which is partially completed.  The tunnel under the arm now goes through to the other side. 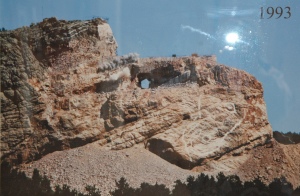 By 2005, the face was complete, and a substantial portion of the right side of the mountain has been removed, as they continue going deeper to carve out the head.

This is a photo how it looks today:

Korczak worked alone on the mountain for several years, and suffered multiple injuries and several heart attacks over the years. He married Ruth in 1950, and they had 10 children. Korczak passed away in 1982 at the age of 74. His wife took charge of all activities at the memorial. In 1987 the focus shifted from carving the horse’s head, to the face of Crazy Horse, at the direction of Ruth.

In 1998, the face was completed, in time for the 50th anniversary of the first blast on the mountain. Due to some substantial donations in recent years, work has accelerated and continues on the head of the horse and the hand of the outstretched arm. They have been blasting down the mountain, and are around 340 feet down, to block out the head. It may, at times, look like nothing is being done, but there are photos in the visitor’s area that show the progress over the years, and it is quite dramatic. Since the memorial is carved in the round (3-dimensional), some of the work is not visible from the viewing deck, as it is on the back side of the mountain.

There is so much history involved in the memorial, and I simply cannot do justice to the story in this short blog. Both of us have talked to many visitors over the last several days of work that were amazed at the story behind the memorial, how big the place is, and how difficult a task it is to blast and carve out a mountain into Crazy Horse. If you want to learn more, please visit their website at Crazyhorsememorial.org

WHAT ELSE IS THERE TO DO?

When you arrive at the memorial, we recommend you visit the excellent movie playing in the theatres that documents the history of the memorial. Then you can browse through The Indian Museum of North America and look at many Native American exhibits. There are two gift shops, one displaying items all hand crafted by Native American Indians, and the other with your standard souvenirs. The memorial has made a special effort to try to purchase items made in the United States, whenever possible. 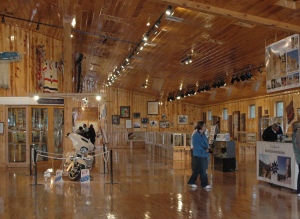 Here are two of our co-workers, hard at work in the gift shop!

The original 1:34th scale model made by Korczak is on display on the large viewing deck, and is a popular spot for photos.

There is a covered porch area that has a scale model of what the entire complex will look like in the future, along with a large bin of rocks that have come from the mountain blasting’s. The rocks are free (donations accepted), and reminded me of Lucy’s rock collection in the movie “The Long, Long Trailer.” You can then enter into part of the original log home of the Ziolkowski’s, which has many antique items on display. There is also a two-story Native American Educational and Cultural Center and Korczak’s artist studio.

Mrs. Ziolkowski is a huge sports fan, and has many sports memorabilia on display, including a size 24 shoe from Shaquille O’Neal.  They also made a tracing of the shoe on the ground, and I put my foot in the outline for comparison.

There is also the Laughing Waters restaurant and snack bar, which has an extensive menu, including gluten-free and vegetarian selections. In the summer, they have various Native American artists perform concerts and dances on the viewing deck. And thanks to a generous donation from the Ray and Joan Kroc Foundation, (founder of McDonalds), they have a very popular nightly laser light show on the mountain. We are looking forward to seeing that when it starts up at the end of this month.

4 thoughts on “A little history of Crazy Horse Memorial”