Wow, we can’t believe we have just finished our fourth week at Amazon.  What a difference a year makes!

Last year, our first at Amazon, was so frustrating at the beginning.  The physical part of walking all day was not so much a problem.  But the confusion of learning where everything was in the building, as well as the mind-numbing tedious nature to our jobs made for a difficult first month.  This year was truly a ‘piece of cake’!

The two hardest parts of Picking is learning the buildings, as you will be all over the place, and you must do so in a very timely manner.  The second part is just accepting the fact that Picking is a very, very boring job.  You will spend most of the day talking to yourself, as that is who you will be working with!  Breaks and lunch are the only time you really have to talk with anyone, other than a quick ‘hi’ when you are passing people in the building.

You can prepare for the physical nature of the job, but the mental part was truly an adjustment.  This year, knowing full well what we were getting into, made for a much easier transition.  You have to give yourself 4 weeks to not only condition your body, but your mind as well.  Most of the folks who quit, usually do so before their fourth week.  But if you can stick it out, you will meet a lot of nice people, learn about good/bad places to work, and get in shape as well.

This year we decided to stay at the campground that is technically across the street from Amazon in Campbellsville, KY, Heartland Campground.  Most people here refer to it as the ‘rockpile’, as it is really nothing more than a gravel parking lot, with white paint outlining your site.  But it has 50 amp, water and sewer, and Amazon pays 100% of the cost.  Although the Green River State Park where we stayed last year is beautiful, we decided to save time and gas money by walking to work.  The parking lot at Amazon gets very congested after Thanksgiving, and we spent a lot of time waiting in long lines. 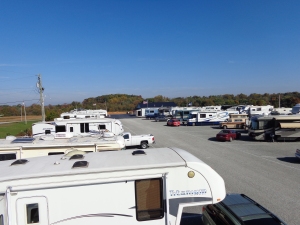 If you look closely at the right center of the picture, you can see Amazon.  Not exactly ‘across the street’.  From our door to Amazon, it takes us 8 minutes to walk (a little quicker on those 45 degree mornings!) 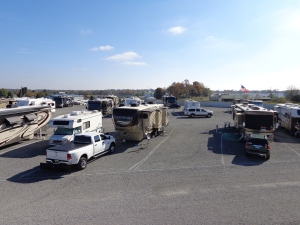 Amazon in the distance

Here is a zoomed in photograph of Amazon from the roof of our fifth wheel. 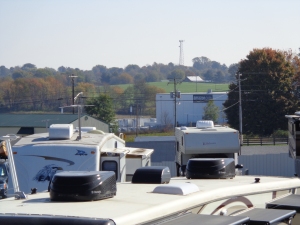 This campground has space for 100 RV’s, of all sizes and shapes.  We opted for the farthest row from Amazon, as it overlooks some green space.  We chose our spot so Makena would be looking into trees, and not other people. It also is a good area to walk Makena and play some football (it’s always about the pets, you know!) 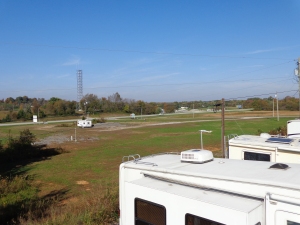 view out back window

This week we attended the ‘all hands on deck’ meeting for the month of October.  It is the last all staff meeting for the year.  The first thing the general manager emphasized, was that this facility was not going to close.  Last month, it was announced the center in Coffeysville, Kansas will be closing in February.  (this is one of four sites they hire workcampers at).  All the employees at that location can transfer to any facility of their choosing.  Apparently since that announcement, the rumors were flying that this location would be next.  The GM emphasized they have just signed a new long-term lease here, and they were making many improvements to the facility, including the repaving of the parking lot, which has already begun.  That seemed to make a lot of people happy.

They also talked about the projections for peak season, as well as overtime.  It looks like we will be able to get the same amount of overtime as last year, for outbound (picking and packing).  Inbound (stowing and receiving), will have even more overtime opportunities.  They will be hiring another 1500 people for the peak season, so the building will be getting pretty full, as it was last year.

The employees celebrating their 15 years at this location were also announced to the group.  The GM said this location has the most employees with the longest tenure at Amazon.  In  addition to receiving an additional grant of $2000.00 in stock options, they received a $100 Visa gift card, and a nice jacket.  One of the gals wore an orange shirt with the words “15 years of hard time” on the back!  That got a laugh out of the group.  She said in 4 years she will be ‘paroled’!

The GM also talked about the bonus for the regular employees for October.  Apparently, every month that you have perfect attendance at Amazon, you get a 4% bonus.  During the months of October thru December, it is doubled.  And if the facility meets their production goal, there is a 6% bonus for the employees.  The GM said they are on track to meeting the production bonus, which means the employees with perfect attendance will receive a bonus of 14% for the month, based on their base pay.  That made a lot of people happy.

We haven’t been doing too much on our days off.  Just resting and getting caught up on some things we neglected this summer.

Quote for the day:  “All things are difficult, before they are easy.” – Thomas Fuller