Our short vacation at Disneyworld was coming to an end, and we spent our last day at Disney’s Animal Kingdom.  It is one of the largest animal theme parks in the world, home to 1700 animals and 250 different species.  We were very impressed by this park, opened since 1998, as it really focuses on conservation and education.  It had less of that traditional “amusement park” feel to it.

The iconic symbol of this park is the Tree of Life, which is a sculpture 145 feet tall and 50 feet wide.  It has 325 animals carved into the tree.

Can you spot the animals is this photo?  You may need to double click on the photo to blow it up, but there are dozens of animals in just this section alone.  You can spend a lot of time walking around the base, and seeing something different each time you look.

Our group started out the day with the excellent 30 minute Broadway style show, Festival of the Lion King.  The music, performers and costumes were fabulous.  Part of the “homework” that Karen and Al made us do was watch the Lion King movie before we went, so we would have a better understanding of the show.  We would recommend using one of your three allotted FastPass selections for this show. 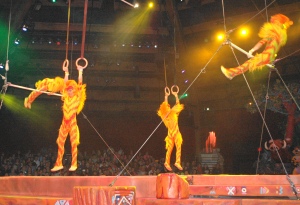 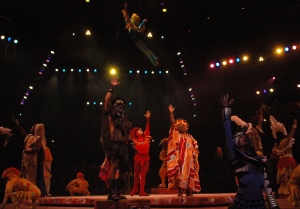 There are many animal exhibits scattered throughout the park, and we stopped to view of few of the many species of ducks on display, such as these Indian Spot-Billed Ducks

Followed by the Black-Necked Swan

And this very popular “duck”, which had a long line of people waiting to see her!

We headed over to the Tree of Life to see the “It’s Tough to be a Bug” 3-D film, which is in a studio underneath the tree.  The interactive movie was a lot of fun, even if you find bugs to be a little creepy.

There are many other outdoor exhibits featuring many species of birds from around the world.  This Victoria Crowned Pigeon was a favorite of mine.  I love the big “crown” of hair.

The area also contained a popular exhibit on bats.  We saw two species on display, the Giant Flying Fox, which is one of the largest bats in existence. They can have a wingspan over 5 feet.  This guy was a bit of an exhibitionist!

To get an idea of the size of this bat, they had a common fruit bat in the same exhibit.

After lunch, and with a great deal of hesitation on my part, I did agree to go on Expedition Everest – Legend of the Forbidden Mountain.  The ride goes straight up into a mountain, and then you go around inside the dark, and backwards, before coming out and dropping down the mountain.  You are supposed to see the Yeti monster, but I had my eyes closed most of the ride, so I just have to take everyone’s word about the monster!  Many of the reviews of this ride describe it as the best roller coaster in Disney.  I just know there was a lot of screaming going on this ride, and it wasn’t all by me!

The highlight of the day was going on the Kilimanjaro Safari.  You board an open top vehicle to explore African animals in a natural setting on 110 acres.  The narrated ride is very bumpy, to simulate the roads that you would travel on a real safari trek.  There is no guarantee of what animals that you will see, as they may or not be active during your trip.  These are just a few photos of the animals that we saw. 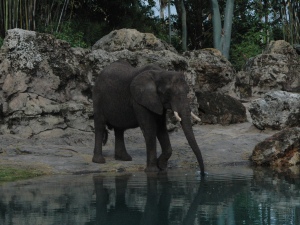 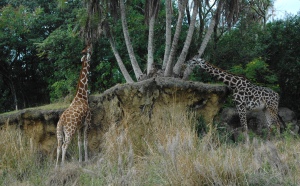 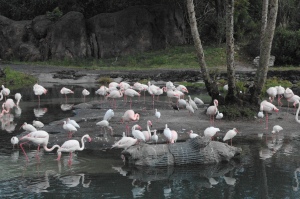 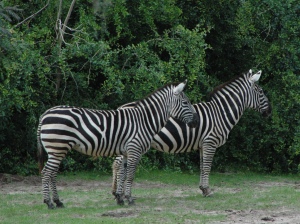 And unlike the other parks where you can stand in long lines to meet the characters, the animals “go wild” in this park, with an afternoon dance party with the characters.  I think the ‘moms’ had the most fun during this impromptu dance session by the characters. 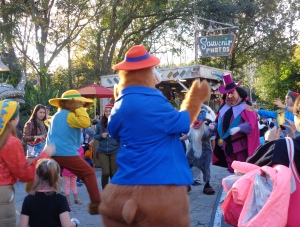 Because of the animals, this park has the shortest operating hours, so we still had a few attractions that we did not have time for.  We headed back to the campground to feed the dog and get ready for our morning departure.  We did make it over to one of the hotels for a quick meal, followed by this excellent Mickey cupcake.

It was a great way to end the short but busy week at Disneyland.  We can’t thank Karen and Al enough for being our tour guides, and to their friends and family for letting us be a part of their week.

Thanks for putting up with a few too many Disney photos!

Quote for the Day: “Animals don’t lie.  Animals don’t criticize.  If animals have moody days, they handle them better than humans do.” – Betty White