Hello everyone, it’s me again!  And now that everything has quieted down, I thought I would give you a little update from the dog’s point of view.

The last few days have been super noisy here in West Yellowstone.  Apparently there are no laws regarding who can shoot off fireworks in Montana, and it seems everyone in town had a pretty good supply of noisemakers.  Saturday was the worst.  My parents had to work, so I was left alone with all the noise for most of the night. People were shooting off fireworks and firecrackers all over town. It takes awhile before it gets dark, so the town-sponsored fireworks did not start until 10:30pm, so my parents were home by then.  They took me out to try to get me to go potty, but as you can see by the photo below, I was so scared from all the prior noise that my tail was stuck between my legs!

What made this night extra scary for me is that we were parked right in the “blast zone!” The launch area for the fireworks was about 100 yards from our RV, right across from the US Forest Service land that I like to take my walks on.  We walked past to check out the area on my early morning walk on the 4th. 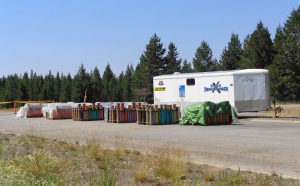 Here is a closer view of all the shells…way too many for my taste! 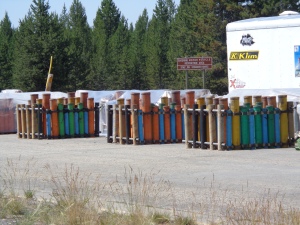 a lot of shells

To put this in perspective, here is a view of our RV from the launch site.

our place from launch site

Too close for comfort, in my opinion!  But I did get some visitors, which briefly made me happy!  My parents co-workers, Tom and Ellen came by to watch.  Diane and Jerry, another work camping couple that my parents met, also stopped by later, to join in the “VIP viewing section”.  That’s what they called it…..I called it the scary, frightening section!  Notice how no one else is around on the sidewalk?  The entire street was blocked off, so only the few people living here could be in this area.

My mom took a lot of photos of the fireworks.  One misfired and landed about 75 feet away, which scared her.  She went into “fire marshal” detail to make sure the burning embers were out.  They said the show was quite spectacular, especially considering this is a town of 1200 people (during the off-season).  I will have to take their word for it, as I refused to come out of the RV until after 1:00am.  That’s how long it took before everyone in the area stopped shooting off more fireworks after the town’s show ended. 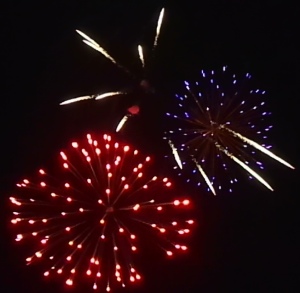 Thanks for following along everyone!  I hope you all had a wonderful, and less scary, 4th of July!  Until next time!

Quote for the day:  “The United States is the only country with a known birthday.” – James G Blaine

4 thoughts on “I hate fireworks!”