After a wonderful 10 day visit with my sister LuAnn, it was time to say our goodbyes and head on to a new state to explore, Oklahoma.  We had a short 200 mile trip north, and found a nice campground right in the city, Roadrunner RV Park.  Their website is outdated, because it does not show the brand new section that we stayed in, as well as the new office and laundry facility.  It was a very convenient spot to stay for four nights.

Since Oklahoma City is the state capital, I wanted to go and see the capitol building.  The capitol is currently undergoing a major renovation with new windows, elevators, air conditioning and other upgrades, which is why it is covered in tarps and scaffolding.  Oklahoma City is the only capital in the United States that has a working oil rig on the grounds.  Also, the dome on the capitol building, was not added until 2002.  The original plans called for a dome, but when the capitol was finished in 1917, they left the dome off.  The entire building cost $1.5 million to build, and the dome would have cost an additional $250,000 at that time.  The total construction cost to add it on in 2002 was $21 million!  At the top of the dome is a 17 foot statute, “The Guardian,” which pays honor to the large Native American population in Oklahoma.  And, as you can tell by the flags, it was very, very windy.  It was windy the entire time we were there. 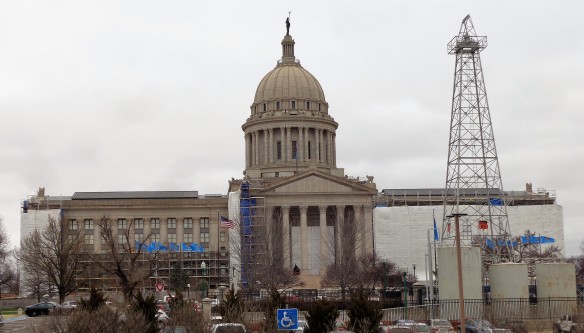 Here’s a view from the ground floor, looking up into the dome.

This is the chamber for the 101 members of the Oklahoma House of Representatives. 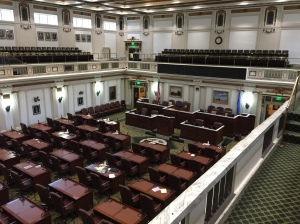 And the chamber for the 48 members of the Oklahoma Senate.

During the time we were in Oklahoma in March, they were debating about giving teachers a pay increase.  I saw this sign hanging on one of the doors in the legislatures offices, and found it to be both timely and appropriate to the current events.

Oklahoma City is home to the National Softball Hall of Fame and Museum, (free), and we stopped in to check out their displays on the history of softball, and to view the memorabilia from legendary softball players, and the United State’s Olympic Softball Team, which won gold medals in 1996, 2000, 2004, and a silver medal in 2008.  Softball was then discontinued as an Olympic sport, but will return again in 2020. 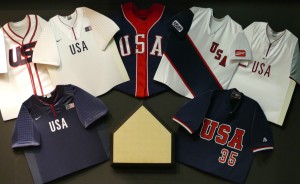 We looked for a hall of fame display for our friend Steve C., but he apparently has not yet been nominated!  Someday Steve, you will have your own display case like these hall-of- famers! 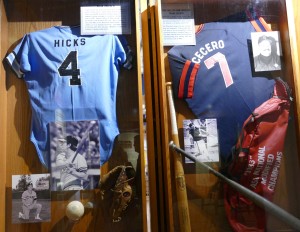 After our visit we decided to check out a “hole in the wall” type diner near the campground that was pretty  busy, so we stopped in for lunch and were a bit surprised when the waitress asked if we wanted “smoking, or non-smoking!”  We haven’t heard that question in years, and both looked to our left at the smoking area, which was completely enclosed in glass walls, with its own doors, and full of patrons.  We don’t smoke, so we opted for the empty, non-smoking area.  We are not sure what the smoking laws are in Oklahoma, but this was certainly the reason this place was so busy!

We did many things in our short stay in Oklahoma City.  Our next blog will discuss the main reason for our visit.

Quote of the Day:  “I’m from Oklahoma.  I mean you can’t have good hair in Oklahoma.  That’s why everyone wears hats.  The wind just messes it up.” –  Ronnie Dunn