Another hidden gem of a museum that we discovered in Oklahoma City is the Oklahoma Firefighters Museum. The small museum is bursting at the seams with a wonderful display of equipment.  Retired firefighters volunteer at the museum, and they are an excellent resource for discussing the equipment on display.

There is a nice tribute to the firefighters that responded to the Oklahoma City Bombing, including patches from the departments that assisted in the recovery efforts.

There is a small tribute to “America’s First Fireman” Benjamin Franklin. In 1736, he created a volunteer fire department in Philadelphia.  Volunteers supplied their own buckets.

The museum has a display of firefighting equipment over the years, starting with several hand drawn pieces of equipment.  As “prehistoric” as these trucks look, they were a technological advancement over firefighters carrying buckets of water to fight a fire.  This is the 1870 New Richmond Hunneman Hand Pumper.  It was a Class A Pumper that required 24 men to operate it at full capacity.  The hose was rolled up and stored on the attached rear cart.

Thanks to a wonderful volunteer, Dan was able to demonstrate how a firefighter pushed the truck to a fire.  The Hunneman pumper is named after William Cooper Hunneman, an apprentice of Paul Revere, who designed the pumper truck. 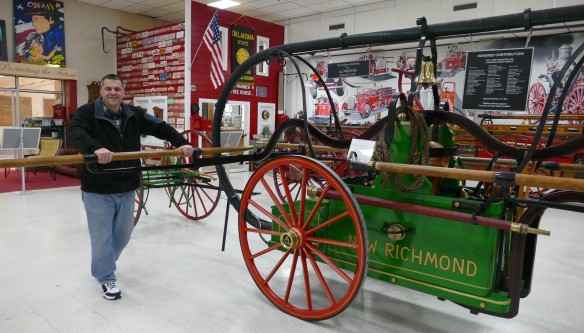 This was a hand drawn ladder truck.

The next generation of technology was the horse-drawn equipment.  Two horses would stand near the steamer, and the harnesses would drop down onto the horses when the fire alarm went off.

Here is a close-up of the Steamer that was in service until 1925.  It could pump 300 gallons per minute. 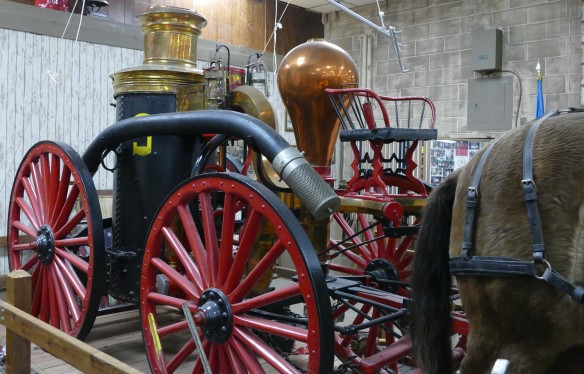 Notice the above truck is red.  There is also another horse-drawn vehicle on display, a white carriage.  This is the vehicle used by the Fire Chief.  It is smaller, so he could get to the fire scene quickly.

The advent of the horse-drawn firefighting equipment is when the Dalmatian became the mascot of firefighters. Horse thievery was a problem, and Dalmatians were used in fire houses to protect the horses and guard the fire station.  Dalmatians adapted well to being around horses, and when the alarm went off, they led the way of the horse drawn cart, and fended off other dogs and animals that would try to approach the horses.

Horses were eventually replaced by motorized equipment.  This is a 1928 Chevrolet Chemical Hose Truck, used by Fort Cobb, Oklahoma until 1941.

This is a 1940 American LaFrance 85 foot ladder truck, used by the Enid Fire Department. 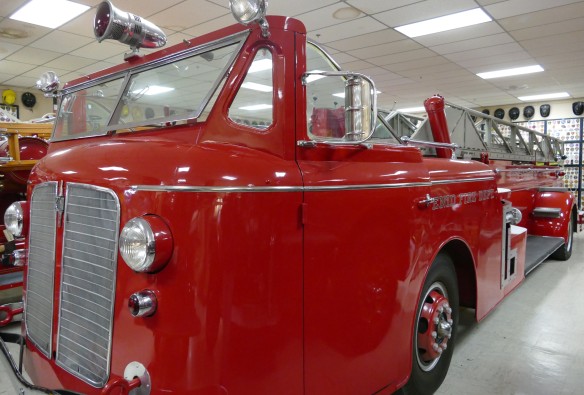 A 1920 Stutz engine was used in Virginia.

This is a 1919 Seagrave Pumper used by the Guthrie Fire Department.

The walls are covered by an extensive collection of patches from fire departments. 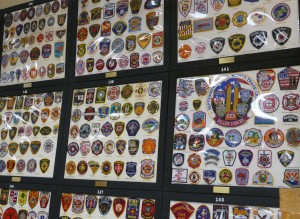 Outside, there is a memorial to the fallen Oklahoma firefighters.

The museum is hoping to raise enough money to build a bigger building, which will offer an even better experience for visitors. We salute all fire fighters and first responders who put their lives on the line everyday to protect us and help us in our greatest hour of need.

This will be my last post on Oklahoma City.  We certainly enjoyed our visit to the area, and left many things to see and do in the future.  The city was a wonderful surprise to us, and we will be back!

Quote for the Day:  “People are always asking me how it is that firefighters run into a burning building when everyone else is running out.  Courage is the answer.” – Chief Kennedy in Ladder 49