We are all settled in sunny Yuma, Arizona for the winter, and have two weeks of work under our belt at Westwind RV and Golf Resort.    They have about two dozen seasonal work campers here, in addition to a year-round full-time staff of locals.  Various jobs are in the mail room (with 1057 sites, there’s a lot of mail), office, bar/restaurant, activities, guest services (escorting guests to their sites and helping back them in), maintenance, and housekeeping.

Dan is one of only two work campers assigned to the golf course, and works Thursday, Friday, Saturday, 6:30 – 3:00pm.  The other work camper has Sunday, Tuesday and Wednesday.  Dan works with three other guys, who work full-time, year round, on the course.  He will be mowing greens, fairways, raking sand traps, and does some trash pick-up on Saturdays, when the regular maintenance workers are off.  The golf course is currently closed for the month of October, due to overseeding.  So he has been able to work on the course without having to dodge errant golf shots!  But that will change November 1, when the par-3 course opens to play.  He is curious to see how his duties will change, once the course opens up.  He’s also looking forward to cooler temperatures next week.  It has been in the 90’s for the last 10 days, but the humidity and dew point have been in the mid 30’s.  So it’s been hot, but not oppressive, since there is no humidity.

In exchange for his 24 hours of work, we receive our site for free, along with all utilities.  This park charges $650/month October/November/December, and $800/month January – April.  In addition, they have metered electric of 14 cents/kilowatt, and a $40/month utility fee for water/sewer/trash/recycling.  Our neighbor, who just has one air conditioner on his fifth wheel, had an electric bill of $144 for October, so we know ours would be pretty high as well, given that we have been running both A/C’s non-stop.  So it’s a pretty good deal.  Dan will not receive a W-2 or 1099 form.  His compensation is not taxed.  There are some campgrounds that do give you a tax form, and it’s best to ask that so you don’t end up with a surprise during tax season, and have to pay taxes on the site that you received.

I work in the office, also on Thursday, Friday and Saturday, from 8:00 am – 5:00 pm.  For my 24 hours, I am paid $10.50/hour, which is the Arizona minimum wage.  It was a little perplexed filling out the Arizona wages tax form, as you do not go by the number of deductions, like the Federal form (most states do).  They have seven different tax brackets, ranging from 0% to 6%, and you have to pick one.  I just picked the middle, at 2.7%.  We’ll see how that works out in April!  Our summer job was in Wyoming, which has no state income tax, so we’ll still only have Federal and one state to file taxes in this coming tax season (Florida, our domicile state, also has no income tax).

There are seven total office workers, one works on Sunday, three work Monday – Wednesday, and three of us Thursday – Saturday.  It has not been too busy, so we are literally tripping over each other.  Hopefully things will be picking up after November 1, when most of the seasonals start to arrive.

Campground Manager is the computer software system that they use here (not to be confused with Campground Master, which is another brand).  Personally, I find the system to be antiquated, as you have to hit the “tab” key to go through the database, instead of clicking a mouse.  It just seems clunky to me.  Once it gets busier, I should get more used to it.  In addition to checking in guests, we also handle the utility bills, and hand out the packages that people receive that are delivered by the post office. (UPS and FedEx will deliver right to people’s site, so that cuts down on a lot of packages) I was surprised by the large number of QVC packages that are received.  Apparently that home shopping channel is still doing well!

Here is our free site for the winter.  We are against a wall, so no one behind us, which is nice.  The sites here are big. 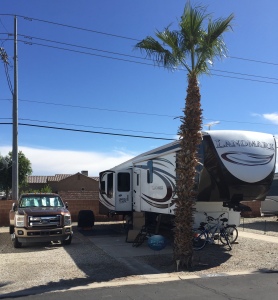 HOWLING AT THE MOON!

When I posted this summer that we were coming to Yuma to work, I received an e-mail from Dave and Marilyn, a couple that we met working at Amazon.  They had moved from Florida to Yuma, as they were tired of the humidity.  Dave said the lack of humidity is much better for his arthritis.  Plus, they work summers in Seattle, for the cruise ships, so it was an easier commute for them.

Marilyn mentioned getting together to “howl at the moon,” which is apparently a popular thing to do in Yuma, out in the desert.  We met up with them, and their neighbors, Jim and Carol, and had a great time.  Howling at the Moon is held every month when there is a full moon.  A local band plays on a small stage, there are food trucks available if you want something to eat, or you can just bring your own food/beverages, plus a lawn chair.  It starts around 3:30 pm, and ends when the moon has risen above the Fortuna Foothills, about 3 miles East of our campground. 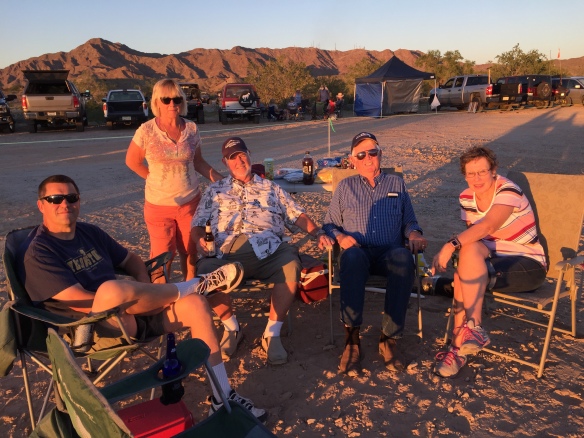 The sun setting off to the West, at 5:55 pm (mountain standard time, or Arizona time, as most people call it)

The Fortuna Foothills, in the East, at the same time.  Jeeps and other off-road vehicles are very, very popular in this area.  The off-road vehicles have LED flag poles on them.  The moon will rise over the foothills.

At 6:00 pm, the sun has gone down, making it easier to see the crowd and band from our vantage point.

By 6:30, the last light of the sun is fading, and the lights are on the stage.  You can start to see the LED lights from the off-road vehicles.

I started to notice everyone turning their chairs around, towards the East, to get ready for the moon to appear.  Around 6:40 pm, a glow began to appear behind the foothills.

As the moon started to rise, I realized that I have never watched a “moon-rise,” only sunrises and sunsets.  It was just as beautiful. (although much harder to get a good picture of).  As it started to peak out, people began to howl.

And when it had fully risen above the foothills (took about 10 minutes), the band did a countdown, and all 500 plus people “howled” at the same time!

And that was the end of a wonderful evening!  There is no charge for the event, but they do come around for donations, to help cover the cost of the band and port-a-potties.  Any extra money goes to various charities.  We had a lot of fun getting caught up with Dave and Marilyn, as well as meeting Jim and Carol.  Hopefully we can get together again soon!

Next month when the moon is full, be sure to “howl” (or listen for us howling in Yuma!)

Quote for the Day:  “Yeah we all shine on, like the moon, and the stars, and the sun.” – John Lennon

10 thoughts on “Back to work and Howling at the Moon!”