We enjoy going to museums, and Ogden has several interesting museums available.  It’s a planes, trains, cars, cowboys and guns paradise!  I though about doing one blog to cover all the museums, but I know people like to look at photos, so I will break this up into two posts, and just cover the planes today.  You can always double-click on the photos to enlarge them.

Hill Aerospace Museum, located on Hill Air Force Base (Utah’s largest employer) just south of Ogden, is an excellent place to spend a few hours looking at over 100 planes and exhibits from the Wright Brothers, World War I and II, Korea, Vietnam and current day battles.  They also have a STEM Education program, and the several dozen school children that we saw running around, seemed very excited to learn about aviation history.  The large planes are outdoors.

Hill Air Force Base is tasked with maintenance and repair of planes.  In the exhibit on the Wright Brothers, they focus on the man tasked with helping the brothers maintain the plane.  Charles Edward Taylor is considered to be the world’s first aviation mechanic.  He built the first successful engine for the Wright Brothers, and taught them how to build engines.  He was the lead mechanic on the first transcontinental flight in 1911.  Below is a replica of the 1911 Burgess-Wright Model F Flyer. 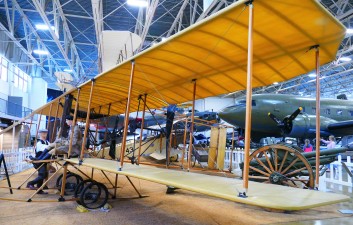 In World War I, this Curtis JN-4D “Jenny” was used by the Signal Corp for training.

The plane below, a North American B-25J “Mitchell” was used to attack Japan after the Pearl Harbor attack.  Although the planes inflicted minimal damage, troop moral increased, and Japan had to bring their fleet back home to protect their country from direct attack.

The museum is packed full of planes.  In the first main building, they do not have an area where you can look down on the planes.

The Boeing B-17G “Flying Fortress” were used in WWII for their strategic bombing of targets in Germany.  This plane is painted in the colors of the 493rd bomb group. 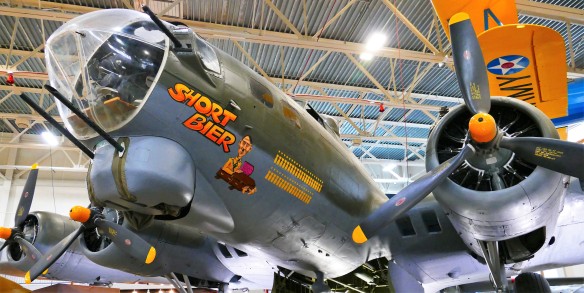 The museum has a display on the role women played during WWII.  The number of women employed during WWII increased by 57%, and many women were employed in areas traditionally employed by men.

With their red and white shark paint scheme, these Curtis P-40N planes went into combat against Japan.

On the way to the second indoor building, we noticed this plane outside in the courtyard, the Lockheed (V) C-140B “Jetstar.” It was used by President Lyndon Johnson.  We were unaware the Presidents had smaller jets at their disposal.  There was no access to view this plane up close.

The second building had some stairs where you could look over the planes from a higher vantage point.

The F-16 “Fighting Falcon” has been the backbone of the Air Force since the mid 1970’s.  At speeds over Mach 2, (about 1400 mph), they are quite impressive! The museum has several on display, and this plane is from the 388th Tactical Fighter Wing assigned to Hill Air Force Base.

The newest addition to the museum, is the F-16A Thunderbird, received in 2017.

The outdoor display is just as impressive as the two indoor buildings.

The B-1B Lancer, put in service in 1986, can carry the largest payload of guided and unguided weapons.

They had the back landing door open, to view the interior of the C-130. 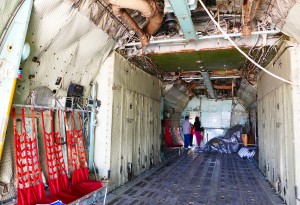 These photos are just a fraction of the planes on display at the museum.  If you are in the Ogden, Utah area, we would highly recommend a visit to this museum (free, donations accepted).   Thank you to all the men and women that have served our country, and keep us safe.

Quote for the Day:  “Hitler built a fortress around Europe, but he forgot to put a roof on it.” – President Franklin Roosevelt