We headed down to Hot Springs to visit the Mammoth Site (cost $10 for adults, free with our VIP pass). In 1974, a developer was beginning to clear land for a housing development when the bulldozer uncovered some bones.  They discovered the bones were from Columbian Mammoths, estimated to be 26,000 years old. Through local donations, the site was preserved and declared a National Natural Landmark in 1980.  A building was constructed around the site, and is open year round to visitors.

It is believed the site was a giant sinkhole, fed by natural springs. Mammoths, bears and other animals entered the watering hole, but were unable to get back out due to the steep embankments, and eventually drowned or starved to death. Mammoth Site is the only in-situ (left as found) site for mammoth bones in the United States. 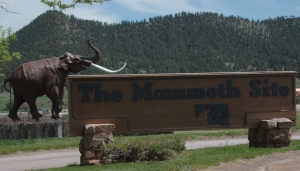 They are continuing digging at this site, and have discovered many more bones over the years.   A tour guide explains the many points of interest on the site, and then you are free to explore on your own in the indoor excavation site, as well as an exhibit hall. We found this to be a very interesting and informative exhibit. At the time of our visit, there were volunteers who were painstakingly digging through the dirt. The buckets of dirt they would collect would be carefully washed, to discover any small remains.

They have left most of the bones where they have found them. 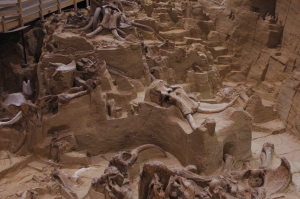 They unearthed a large mammoth that had no head, despite digging all around it.  The Paleontologist have no explanation as to what happened to the head, and named the mammoth Marie Antoinette.  When they discovered the mammoth was a male, they renamed him Murray Antoinette, in keeping with the be-headed theme! 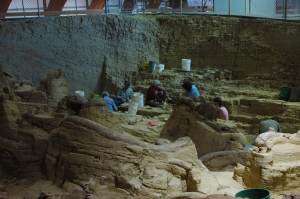 These are the tools that the volunteers were using.  It is very tedious work.

Tools of the trade

They had some body parts on display to give you they idea of how big the bones are; 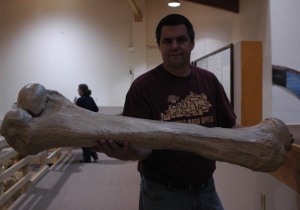 This is part of a pelvis that is left intact in the grounds.

In order to determine what types of mammals they are, the scientists study the angle of the tusk (yes, another Math lesson).  There is something called Schreger Lines, which will determine if the tusk is from an elephant (obtuse angle – greater than 90 degrees) or a mammoth (acute angle – less than 90 degrees).

And then there’s the histogram on the tusk angles. (okay, enough math!) 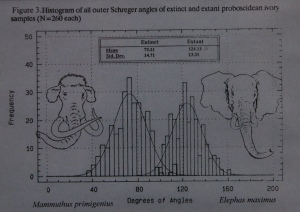 We enjoyed our visit, and would recommend this place if you are in the area, or visiting nearby Wind Cave.

Quote for the Day:  “There is no good scientific reason to bring back an extinct species.  Why would one bring them back?  To put them in a theme park?” – Hendrik Poinar