One of the longest running steam trains remaining in service, the 1880 Train, was on our VIP pass, so we spent a few hours taking the 20 mile round trip from Hill City to Keystone. Ticket prices are $28.00 round trip for adults, and we received complimentary passes.

The train travels through the scenic Black Hills Forest where you can see many rock formations, Harney Peak, and (let’s be honest) a lot of run down trailer homes with a ton of junk in the yards. 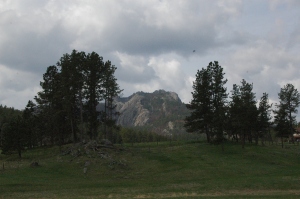 Harney Peak from the train

the other scenic views

The train has your choice of open air cars and cars with windows. We opted for the open air car, as it was a nice day outside. The 1880 Train was used in the filming of the Gunsmoke television series. Our engine was number 104, which was built in 1926. They use water and oil to power the engine, which creates a lot of white smoke.

Since the Black Hills has many changes in elevation, the train has to maneuver 4 – 6% grades, which is very difficult for any train. After we departed Hill City, the train quickly encountered a steep 6% grade, and we were barely moving on the tracks. Many of us in the back began chanting “I think I can, I think I can” to encourage the train to make it up the hill! When going up a hill, they add sand to keep the engine from overheating. This creates a brown smoke. 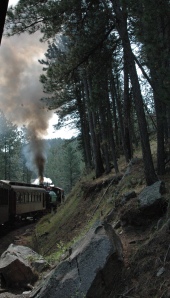 We had an enjoyable time on the trip, and it was interesting to see how the “well to do” traveled back in the early 20th Century.  There were remnants of old buildings along the way.

There are some old telegraph poles along the way, with their glass insulators still intact.

When we arrived at Keystone, the engine unhooked, moved down to the water tower to refill, and then drove around the train to hook back up in the front. 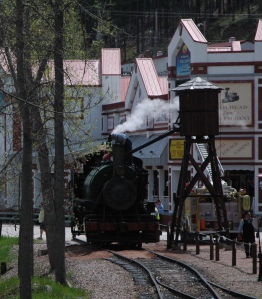 The engine we had for this trip was built in 1926 and was restored by the 1880 Train company.

When we completed our round trip back to Hill City in just over 2 hours, the engine was again disconnected and taken back to the shop for maintenance before the next departure.  They seem to take good care of these antiques.

back in Hill City

I firmly believe that you are only as old as you feel, so I couldn’t resist heading to the “kiddie” train area for some fun.

I can fit in this

We had a nice time, the weather was perfect for the trip.  If you love trains, this would be a good trip to take.

Quote for the day:  “The introduction of so powerful of an agent as steam to a carriage on wheels will make a great change in the situation of man.” – Thomas Jefferson