Since we arrived in West Yellowstone, MT three weeks ago, it has rained every day.  The locals are happy about the rain, as they did not have much snow this winter.  As many have put it, more rain in May means less smoke (forest fires) in August.  I’m thinking it will be a bumper crop for mosquitos this summer!

The forecast for this past Sunday indicated it would be nice until the afternoon, so we decided to get up early and head over to Yellowstone National Park for the morning.  We got up bright and early….to thick fog!  The best wildlife viewing is early morning or just before sunset.  We decided to wait a few hours for the fog to lift, so we were not expecting to see much wildlife on this visit.  Since we are here for the Summer, we have decided to do the park in small sections.  The park is divided into eight sections, and we decided to head to the Canyon Village area, to view the Grand Canyon of the Yellowstone, along with the Upper and Lower Falls.

The canyon is over 24 miles long, and is continuously changing, due to wind, water, earthquakes and other natural occurrences.

Along the way to several viewing positions, remnants remain of the glaciers that melted over 10,000 years ago.  This boulder, as big as a small home, remains nestled in the pine trees. 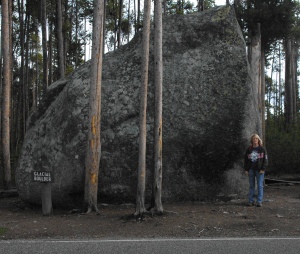 At 308 feet, the Lower Falls is the tallest waterfall in Yellowstone National Park. 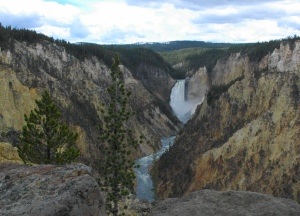 The Upper Falls, is named because it is at a higher elevation on the river.  However, the waterfall is only 109 feet.

We did stop and view one geyser on our way to the Canyon Village area, but I forgot to take a picture of the sign, so I have no idea what this one is called.  It was very small and all by itself. 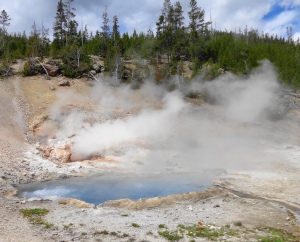 The highlight of the day was encountering two beautiful Elk that were hanging out near the parking lot by the Upper Falls viewing area.  Elk shed their antlers late March thru April, and then begin re-growing them almost immediately.  They can grow as much as 2 inches per day.  They are velvet covered during the period of growth, and by summer the blood flow stops to the antler, and it hardens.  The Elk scratch their antlers along trees to scrape off the velvet. 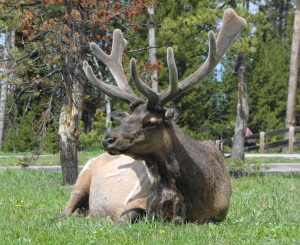 We are very excited about having the entire summer to take our time exploring the park.

Quote for the day:  “Think of your life as a waterfall; it may come crashing down at some point, it may have it’s ups and downs, but in the end, it will continue to flow.” – unknown

4 thoughts on “Rain, Rain and a brief park visit”