Hello everyone!  Did you miss me?  I know I have not blogged in a while, but “the Jack is back”!!  While my parents are busy starting up again with Amazon, I thought I would recap my summer vacation. 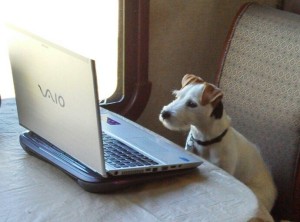 I know my parents had several posts regarding their adventures in Yellowstone National Park, but I have nothing to add, as I never went into the park.  It is really not a dog friendly park.  Dogs are only allowed where cars can go, and I know what parking lots look like!  I guess the rangers don’t want us little dogs to be appetizers for the bears.

However there is plenty of US Forest Service land in West Yellowstone, so I was able to go on plenty of walks in the woods.  As a matter of fact, I even lost over 1/2 pound this summer (unlike my parents).  My doctor would be proud of me, as he was concerned about my weight during my last visit!  Yes, I am back to a “lean, mean, playing machine!”

Homeroom at Madison Crossing, the place where my parents worked this summer, was very dog friendly, and I quickly learned where the treats were located behind the counter.  I visited several times, during our walks around town.

For those that have been following me for a while now, you may remember my parents purchased a 16 squeaker stuffed squirrel for me.

I diligently worked on destroying the squirrel this summer.  My parents were thrilled that this toy lasted over 6 months, but then decided the “dead” squirrel would make a good wig for me.  I was not amused!

Once they finished up their summer jobs, we started heading east, and we stopped at a nice rest area in Montana, which had the best pet area I have ever seen. It was all fenced in, and had a fire hydrant right in the middle of the area.  Lot’s of good smells!  Too bad all rest areas can’t be like this!

We stopped at Theodore Roosevelt National Park in North Dakota for a night.  My parents drove around the park loop, and I was able to check out (from the comfort of the truck) the prairie dogs.  My parents said I was not allowed outside of the car (another unfriendly dog park), so I could only view the hundreds of “park dogs” from the window.  I barked and squealed a lot, just to let them know I was in the area. 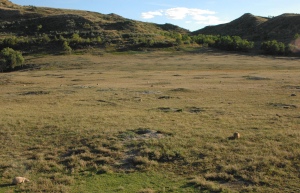 After a nice stop in MN visiting with Dan’s brother Gary and Julia at Camp Anderson West, we made it back to “Camp Meyer” (Dan’s sisters Linda and Doug).  It’s my favorite place, because I can run around off leash, and get plenty of treats and attention.  Since my parents were going to be busy with dentist/doctor and other appointments, my grandparents came down to take me to their place and spoil me for several days.  I was so excited to see them, that I fell down the stairs of our 5th wheel, and got a big cut above my eye.  So I was put on a “time out” for a little bit with an ice pack on my head.

Time went by so fast, and now my parents are starting their 3rd year at Amazon, this time in Jeffersonville, IN.  I’m sure my mom will be posting soon about that.  So I’m back to being in the camper for long days. Hopefully I can get some more treats and toys from this!

Take care everyone, and thanks for following along on my journey.  I’m starting year three on the road, and I am one lucky dog!

Quote for the day:  “Scratch a dog and you will find a permanent job.” – Franklin P Jones

10 thoughts on ““My” Summer Vacation”