In my last post, I went over  the outdoor memorial for the Oklahoma City Bombing Memorial. And I want to apologize for having the wrong year, 1985, instead of 1995.  The post has been edited, but if you receive the blog via e-mail, it had the wrong date.

Today will cover the Oklahoma City National Memorial Museum.  The museum is one of the best museums I have ever visited.  It takes you through the day of the bombing, the days and weeks that followed, and has many first hand stories from the survivors and first responders.  It chronicles the investigation and trials of the domestic terrorists, and has a moving memorial to the victims at the end of the museum.

When you walk into the first of two floors in the museum, you are greeted with a large mural of downtown Oklahoma City with the words, “A day like any other” on the wall.  You will learn about the history of the Alfred P Murrah Federal Building, along with what the times were like in 1995.  There is a “technology display,” which contains these “state of the art” cell phones and pagers! (and remember the cell phone plugged in to the cigarette lighter…now called a 12 volt charger!).  Just 14% of the population was connected to the internet in 1995. 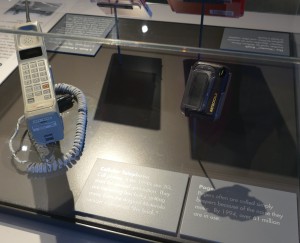 Also on display is an old closed circuit television camera, and video taken from a nearby office building of a Ryder rental truck driving down the street in Oklahoma City, heading to the Federal Building.

You enter into ‘the hearing room’ and sit down to listen to an audio recording from the Oklahoma Water Resources Board Meeting that was going on in a nearby building.  Just a few minutes into the hearing, at 9:02 am, the tape recorder picks up the sound of an explosion.  I was struck by how loud the explosion was.  It is the only documented recording of the blast.  The doors from the hearing room open, and you walk into a room containing many artifacts from the bombing.

This clock, from a nearby office building, stopped at 9:02 am.  The lower left has a date book from one of the victims in the Murrah building, and the lower right portion of the photo is an electric pencil sharpener. 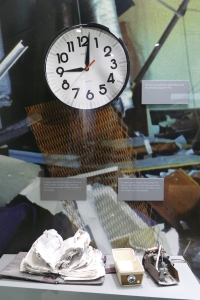 The next photo below has a piece of an elevator panel, car door frame, light fixtures and plaster found in the rubble.

A few pieces of the bronze letters to the federal building were found amongst the rubble.  They were pitted and scarred from the blast. 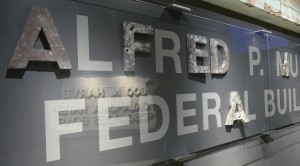 A Florida license plate was also found in the rubble, which provided investigators clues to the bombing.  The plate belonged to a Ryder rental truck.

At 10:28 am, first responders were ordered to evacuate the building, as a box labeled “explosives” was found in the building.  The box was removed by the bomb squad, and rescue efforts resumed.  This was the item in that box, called a TOW missile (tube-launched, optically-tracked, wireless-guided) missile, used by the US Customs office, which was located in the building.

One of the many stories told in the museum, is that of Daina Bradley.  She was at the Federal Building, along with her two children, her mother and her sister.  They had gone to the Social Security Office to obtain a social security card  for her new son.  Rescuers found her trapped under a concrete beam, and they started to dig her out from under the rubble.  But then they had to abandon her, when they were ordered to evacuate the building as a result of the bomb scare at 10:28am.  Once the ‘all clear’ was received, rescuers went back to her and spent two hours trying to dig her out, but were unable to do so.  Her lower leg remained trapped, and the only way to rescue her was to amputate her leg.  An orthopedic surgeon, Dr. Andy Sullivan, attempted to amputate her leg with a scalpel, but had to abandon her after another bomb scare, at 1:48 pm, forced all the rescuers to again evacuate the building.  After the ‘all clear,’ he again returns to her, and using a nylon rope as a tourniquet, is able to complete the amputation using his pocket knife.  This was done without anesthesia. Ms. Bradley survived the bombing, but her mother and both of her children did not.  Her sister was severely injured.  Below are the items donated to the museum by Dr. Sullivan.  This is just one of the many gut-wrenching stories told in the museum. 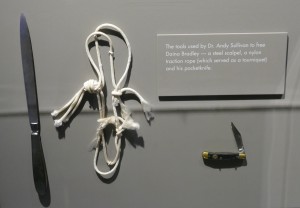 One of the heart-warming things I took away was how quickly, and compassionately the citizens of Oklahoma City responded to this bombing.  There are photographs of nurses running down the street towards the site of the bombing carrying hospital supplies and blankets to help the victims.  A triage was set up outside the building.

There was a food and restaurant convention going on in downtown Oklahoma City, and those members quickly used the equipment that they brought to display at their sales booths, to set up an impromptu ‘restaurant’ to feed all the first responders.  Fire Departments from all over the country sent personnel to help with the rescue efforts.  Sadly, one of the members from the New York Fire Department that helped in the rescue efforts in Oklahoma City, was killed in the 9/11 bombing in 2001.

A piece of the original chain link fenced is on display at the museum, with a small portion of the items sent to Oklahoma City from all over the world.

The museum has an in-depth timeline on the investigation and prosecution of Timothy McVeigh,  Terry Nichols and Michael and Lori Fortier.  I won’t go into too much detail on them, or the reasons behind the bombing. For me, this visit was about honoring the victims and the survivors. But I will say that McVeigh was sentenced to death, Nichols is serving a life sentence, Michael Fortier served 12 years, and Lori was given immunity in exchange for her testimony.

Timothy McVeigh was stopped at 10:17 am, just seventy-five minutes after the bombing, on I-35 by an Oklahoma State Trooper for having a missing license plate on this 1977 Mercury Grand Marquis.  During questioning, the trooper noticed McVeigh had a concealed handgun, and took him into custody.

By April 22, federal investigators had put together enough evidence from the bombing site to come up with a suspect, McVeigh, and discovered he was being held in Perry, Oklahoma on the handgun related charges.  He was taken into federal custody, and was wearing this t-shirt at the time of his arrest.  The Latin phrase means “Thus always to tyrants,” and was the phrase John Wilkes Booth shouted when he shot President Lincoln.  McVeigh’s booking photo is in the bottom corner of the photo. 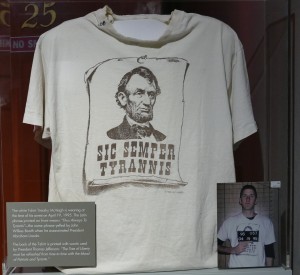 On May 23, 1995, the Murrah Building was imploded.  At the time, it was thought there were just two remaining bodies in the building, both employees of the credit union.   They allowed the two families to hold a memorial service prior to the implosion.  After the implosion, they found the remains of three bodies.  The third person, who had been reported missing a week before the implosion by his sister, was believed to have been in the credit union as a customer during the explosion.

The last part of the museum is the Gallery of Honor, where photographs of all 168 victims are on display, along with mementos provided by family members. Putting a face with a name, and seeing the objects in the display cases, was a heartfelt way to remember the victims.   The name of every victim is read over a speaker in the room.  The room is a wonderful memorial, but difficult to walk through, without fighting back the tears.

The museum has a STEM lab, for teachers and students to learn more about the bombing, forensics and investigations, and how to engineer and build structures that can withstand both natural and man-made disasters.

The one thing I will always remember from my visit to the museum, is how well everyone came together to help each other out.  It was even noted in the museum that the crime rate in Oklahoma City was almost non-existent for weeks after the bombing. The resilience of the people in Oklahoma City is amazing. I left the museum emotionally drained, but at peace knowing good always conquers evil.

Quote of the Day:  “We don’t even know how strong we are until we are forced to bring that hidden strength forward.  In times of tragedy, of war, of necessity, people do amazing things.  The human capacity for survival and renewal is awesome.” – Isabel Allende