During our visit to Oklahoma City, we spent a morning visiting The 45th Infantry Museum. The Division was established after World War I, from the states of Oklahoma, Colorado, Arizona and New Mexico.  The division was called into service during World War II, and served with General George Patton’s US 7th Army division.  After WWII, the division was just for the state of Oklahoma, and reverted back to National Guard status.

The 45th Infantry Division was again mobilized for the Korean War and fought in several battles.  In 1969, the division was disbanded and restructured into several divisions.

The museum contains an extensive collection of military weapons from the Revolutionary War through Vietnam.  It also contains weapons from other countries that were confiscated during various wars.

The size and power of the weapons changed between the Revolutionary War and World War II! 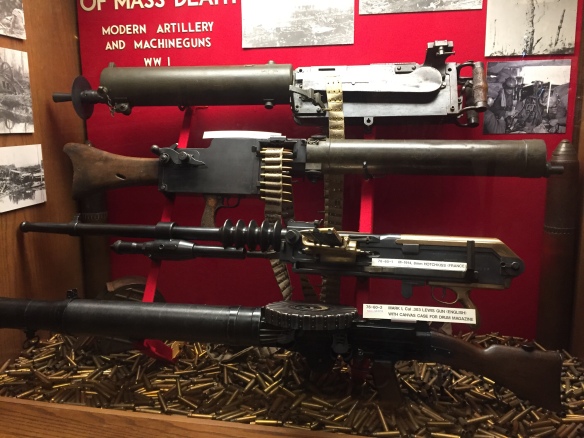 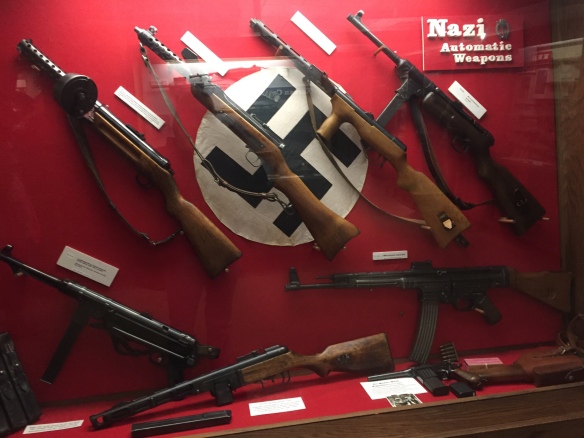 Members of the Division were part of a raid on Hitler’s residence, and brought back a lot of his personal items.

Display cases are filled with “hi tech” equipment, used during the wars.  I’m not sure how effective this gas mask was.  Seems like it is just attached to a tin can. 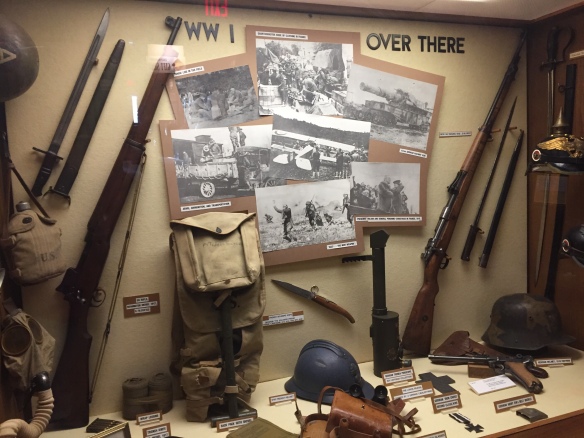 The museum has a large collection of pistols as well.

Many jeeps, ambulances, and other vehicles are on display indoors.

Outdoors, the museum has several dozen tanks, aircraft, helicopters and monuments on display.  You can spend several hours going through the museum.

For me, the most fascinating part of the museum was a small display on the history of the Division’s insignia.  When the Division was established, their emblem was a yellow swastika on a red square, to honor the Native American and Spanish Heritage cultures of the four states forming the division.  The swastika was an Indian symbol of good luck. The Nazi party also adopted the swastika around the same time.  The division eventually stopped wearing their insignia, as the swastika took on a new meaning, and they did not want to be associated with the symbol.  What was a symbol for good luck became a symbol for evil and hatred.  The Thunderbird, another Native American symbol,  became their new emblem, using the same yellow and red color scheme.

We had never heard about this museum, or the history of the 45th Infantry Division before.  It was truly a little gem, and we would highly recommend a visit.  There is just so many things on display, and it was hard to pick out photos for this blog, as I have so many.

Quote for the Day:  “My first wish is to see this plaque of mankind, war, banished from the Earth.” – George Washington

6 thoughts on “The 45th Infantry Museum”