Back in July, we implemented Plan C, and left Wyoming after working for two months at Luton’s Teton Cabins.  We didn’t do too much in Wyoming, as we had spent the last 4 summers there, and we were trying to stay safe.  We did spend a lot of time binge watching shows on Amazon Prime Video.  We were able to watch all three seasons of The Marvelous Mrs. Maisel, and we are looking forward to season four whenever it comes out.  In addition, we streamed all six seasons of Downton Abbey.  We both loved the shows, and if you are looking for something addictive to watch, we recommend them.

Our trip back to Wisconsin was uneventful.  We can drive much longer distances with our camper than the fifth wheel.  And I drove about 200 miles the first day – Dan said it was the worst gas mileage we have had since getting the camper! (I am a bit of a ‘lead foot).  It was a 1200 mile trip with virtually no contact with anyone, as we stayed over at Cabella’s (they are very RV friendly) and packed food for meals.  Only had to stop for diesel and pottie breaks for Makena and us.

You know you’re back in Wisconsin when the grocery store has this sign at the entrance:

Our first stop in Wisconsin was to see our friends Mike and Sue, and their new cabin on 40 acres.  They both have been working from home since March, and have been isolating as well.  It was an enjoyable time catching up with the two of them.

When we arrived at Dan’s parents house in Oconto Falls, we were greeted with “Joan’s Wish List,” a typed up list of 20 items that she “really, really” wanted us to do!  After the first week, we had crossed off 8 items, but 9 more were added to the list.  So we started week two with 21 items.  By week three, the list had 38 items….hmmm!  As with any project, when you start something, you discover 2 or 3 more things that need to be done.  We are now in the 40’s and rising!!!

Some things are easy, such as teaching them how to watch their local Church service on You-Tube on their television, so they don’t have to go in person.  They have been wanting a new refrigerator for three years (they bought their current one in 1991, and it sounds like a truck).  They have a specific size requirement, so they have never found what they want, or just couldn’t make up their mind, depending on whom you talk to!  We sent Stu out golfing, and took Joan to Green Bay (Stu did a happy dance when he found out he did not have to go.)  The appliance stores looked like they were going out of business, as they have not been able to get any new inventory, with the manufacturer’s shut down because of Covid-19.  That actually worked to our benefit, as Joan realized she had to make a decision, and found something that fit.  Now or next year, was what we told her.  We had a very patient sales person.  And it only took us four hours of looking!

It was delivered yesterday, and Dan had to do a little sanding on the bottom of the cupboard to get it to fit.  The old fridge is on the upper right.  Another thing checked off the list!

One thing I added to the list was cleaning out all the kitchen cabinets and oiling them.  This is something we do every time a guest checks out at Luton’s.  Joan agreed to donate a few unused items, and was impressed by how nice the cabinets looked after we were done.  That’s when she added the dining room table, piano and organ to the list to get oiled!  It really makes a difference. 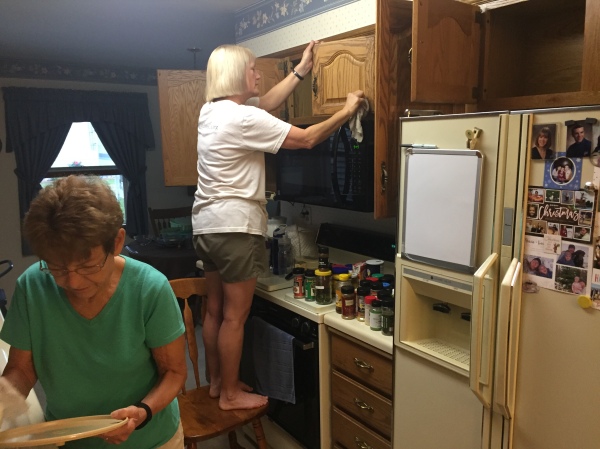 Washing windows was another “to do” item that wasn’t on the original list.  I purposely avoided helping at first, as mother and son had a long “discussion” on the proper way to clean them!  I kept busy reading a magazine from January, on how to make 2020 “your best year ever!”  Once they worked out a compromise on window cleaning, I helped out as instructed.

Other little projects consisted of fixing the electrical cord on Joan’s sewing machine that she bought in 1957, a Phoenix Automatic.  There’s no plastic on this machine! 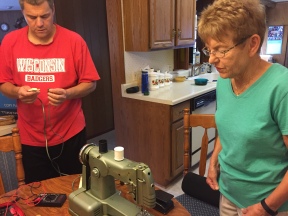 Gutters were cleaned out, and we washed and scrubbed the deck.  It will be stained in a few days when it dries out. 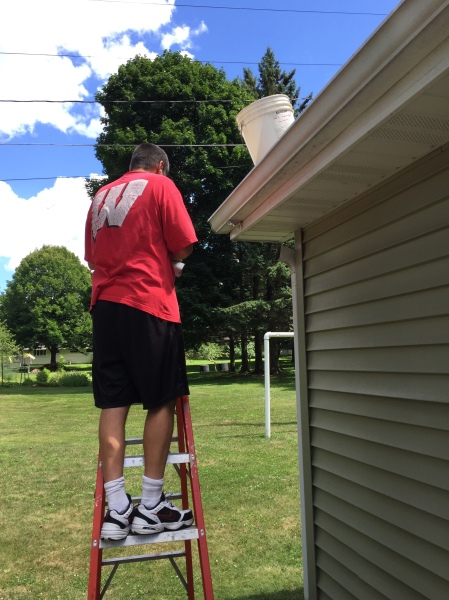 And Dan spent about 7 hours cleaning out Joan’s old desktop, running Windows 98.  That was another discussion I stayed away from.

We did manage a few fun outings.  My sister LuAnn decided to visit from Texas, and for the first time since our mom died in 1994, all of my brothers and sisters were able to get together.  So there are some positives to come out of this pandemic, as we would have been in Alaska this summer, and unable to make the party.  I was a little hesitant at going, but my brother assured me it would be just the siblings/spouses, and it would be outdoors.  It was a great time getting together, and we decided to recreate the photo that we had taken together in 1994.

My brother and sisters in 1994.  Back row, Brian, Greg, Jerry.  Front row:  Jonell, LuAnn and Margie.  I’m the youngest of the six, followed by Margie, LuAnn, Brian, Jerry and Greg.

Here we are in 2020, in the same order as the photo above.  We are all aging gracefully! 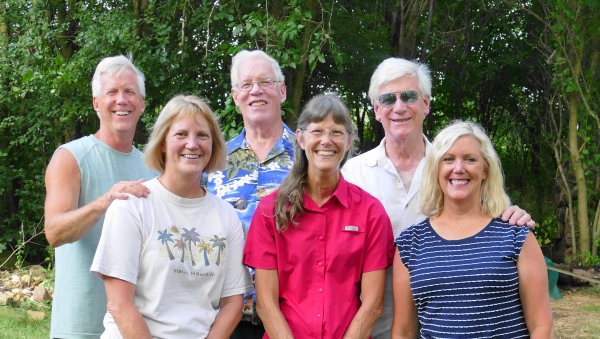 And here’s our Covid-19 photo, with spouses that were able to attend.  We all had big smiles:

Dan’s niece Kami, was turning 40, so we attended a small family celebration at Dan’s sisters house.

And Doug had set up a “golf course” with tennis balls on their property, so we all enjoyed the new outdoor, socially distant, sporting events!  Adapt with the times!

On our way back from Doug and Linda’s house, we heard a loud noise, and thought we ran over something.  Then Dan discovered the turbo was not running on the diesel.  Turns out on Ford 350’s from 2011 – 2015, it is a common occurrence after 100,000 miles that the hose connected to the turbo charger, called the intercooler outlet tube, blows out.  So we are waiting for the local Ford dealer to try and locate a new part, which is a bit of a challenge since they are behind on inventory.  We are hoping to have it repaired next week.

Had I posted this blog a few days ago, the post would have ended here.  But as any RV’er knows, and actually, as anyone living on planet Earth in 2020 knows, plans can change at a moments notice.  So now we are on to “Plan D!”  We have received several telephone calls, text messages and e-mails from everyone that we worked with at Luton’s, asking us if we could come back to finish out the season.  Apparently one couple, that has worked their the past 4 summers,  suddenly quit.  Despite the pandemic, it has been a very busy season at Luton’s (many lodging places did not open up this season), and they really need help.  Brad and Joanne, the owners, have always treated us well.  And we were amused by all the text messages and e-mails from our co-workers, so we have agreed to go back and finish out the season.  We will leave around the 20th, as we still have some appointments (and more things on the to-do list) to complete.

We do plan on returning to Wisconsin in mid-October, and hope to actually spend more times visiting with some friends, even if it has to be with mask and six-feet apart!

Quote of the Day:  “Life imposes things on you that you can’t control, but you still have the choice of how you’re going to live through this.” – Celine Dion

10 thoughts on “Back in Wisconsin”