We finally left the 48th state (Arizona) in April and made our way up to Wyoming for the summer to work.  But not before our friends from Yuma, Dave and Marilyn, stopped in for a quick visit.  Thanks to a tip from Jack and Ruth Ann, the four of us took a very scenic, but winding road over to Tortilla Flats, Arizona, population 6!  The town was originally a stage coach stop in 1904.  Now it is a fun little tourist town.  And I do mean little, as this is the entire town: 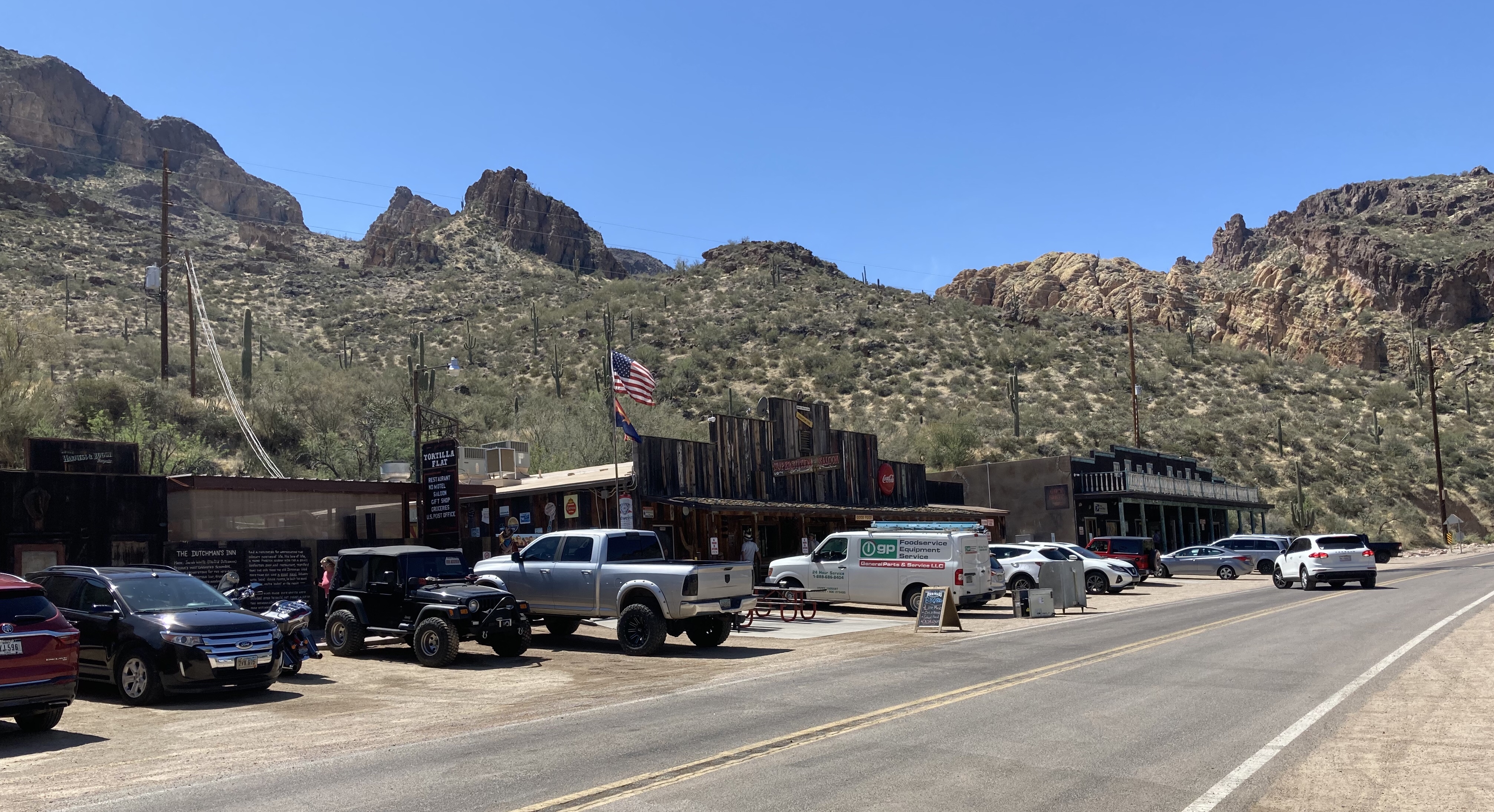 We did stop in for a cold beverage and lunch at the saloon, which had saddles as the bar stools.

And I was immediately drawn to (or suckered) into this sign:

The next day the four of us ventured out to Airbase Arizona, Commemorative Air Force Museum in Mesa, Arizona. I will do a separate blog post on that, as it’s hard to just select a few photos for this post.

After leaving Arizona, we headed back to Transwest Truck Trailer RV in Frederick, Colorado, for some quick service work on our motorhome. The motorized front shade/visor had been giving us problems for the past several months. We have talked with both Newmar and the manufacturer of the shade, AutoMotion, but neither could come up with a solution. Newmar did send us a remote, so we could manually raise and lower the shade. Since it was still under warranty, we wanted this fixed.

I also was doing laundry in our motorhome when I heard water running. It’s never a good thing to hear water running when you are in an RV! The hot water valve going into the washer did not shut off at the end of the cycle, and water was spurting out the back. Fortunately, the washer sits on a pan, which caught the excess water. This could have been a lot worse! We did try to take the washer out to look at the back, but this unit is bolted down so well it wouldn’t budge if an earthquake struck. Dan called Transwest and asked if they would look at it, and since it is a Splendide, they said they could. Apparently they will not service other brands of washers.

Newmar agreed to overnight parts to Transwest since we had made them aware of our issues. The motor on the shade was replaced (and works perfectly now) and the intake valve on the back of the washer was replaced. It took the technician four hours to get the washer out of, and back into the closet. We e-mailed Newmar and suggested they put in an access panel in the closet, so you can reach the back of the washer/dryer. Hopefully we will not have any more issues with that, as the bulk of the repair bill is just getting access to the machine. But everything was covered under warranty, and we were soon on our way to Wyoming.

As we were driving up I-25 into Wyoming, a truck passed us and blew a tire. We knew we couldn’t escape the flying debris, and pulled into the next rest area to check for damage. Oddly, our exhaust pipe was the only thing damaged. We felt we really caught a break.

What you can’t tell from the picture above is how close to the ground the pipe is. We started calling Ford dealers and RV dealers in Wyoming to see if we could get this repaired before the muffler hit the ground or the tire. The Ford dealers said they were too small to fit an RV into their shop, and the RV dealers were unable to get us in. One dealer recommended calling Central Truck and Diesel in Casper. Dan called and explained our situation, and they said to “come on in.” They said they could order a new tip, but it would be several days before the part arrived, or they could just bang it out and reweld it on. We opted for the latter. It took the service technician three hours to repair, and then we were on our way.

We finally made it to Luton’s Teton Cabins at 8 pm, and got up and started work the next day. This is our sixth summer now (and hopefully last, as we really want to go to Alaska!) It’s going to be a super busy summer, as we are booked solid at the cabins.

3 thoughts on “More visitors and moving on”