Yea, it’s our day off, so we went back into “tourist mode”.  Kentucky is the Bourbon capital of the world, so we visited two of the many distilleries in the area.  They now have “micro” distilleries as well.  First, a little history on Bourbon.  Back in the 1780’s, one of Kentucky’s first counties was named Bourbon County.  When they whiskey was being shipped to other areas, Bourbon was stamped on the barrels, to identify the point of origin.  People then started asking for that “bourbon” whiskey, and the rest is history.  All bourbon is whiskey, but not all whiskey is bourbon.  By law, bourbon can only be produced in the US, made with at least 50% corn grain, and aged a minimum of two years in brand new charred, white oak barrels.  The barrels can only be used once, and then most of the bourbon barrels are sent to Scotland, to make Scotch whisky.  Notice I left off the “e”.  Now comes the English lesson.  The general rule of thumb in spelling Whiskey/whisky is based on the origin where it is produced.  If there is an “e” in the country (like United States, Ireland), then there is an “e” in whiskey.  No “e” in the country (Canada, Scotland), means no ‘e’ in whisky.  There are exceptions however, as in our first tour, to Makers Mark.  They do not use an ‘e’.  I have inserted a lot of photos below.  As with all the photos in the blog, you can double-click them to make them bigger for viewing.

Makers Mark is a widely known brand, but it is still made in small batches.  They age their barrels just under 6 years, and blend the barrels to make a smoother product.  They offer tours with tastings for $7.  Now for the cooking class lesson on how bourbon is made (trying to keep these blogs educational!) In simple terms, the grain (always 50% minimun corn, and then other grains depending on the brand) is placed into mash pots, to grind and cook the grain, which becomes mash.

From the mash, the liquid is placed into fermentation pots and mixed with yeast for 3 days.  By day 3, the pot looks like oatmeal, but has a distinctive whiskey taste.  (and yes, they do let you stick your finger in for a sample!)

From the fermentation room, the liquid goes to the copper pots for distilling.  The remainder of the leftover grain mash goes to farmers to feed their cows.  I think there a lot of happy cows in Kentucky! 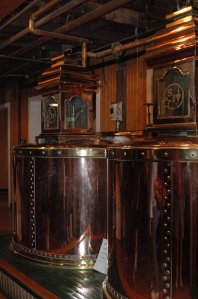 The liquid in the pot starts at 140 degrees, and is cooled to 120 degrees at Makers Mark.  Right now, the product that goes into the barrel is commonly known as moonshine.  It is during the barrel aging process, that it becomes bourbon, and over time develops the caramel coloring from the charred wood barrel.

From the barrel, the liquid goes to bottling, labeling and packaging.

Boxing up the goodies

(Pudge, I tried to put a mailing label on one of the boxes for you!!)  After all this, it was on to the tasting room!  Makers Mark has a big area designated for this, and goes in to the proper way to drink their product.  We sampled the “pre-barrel” whiskey (aka – moonshine or white dog), a regular Makers Mark, a whiskey that was aged too long (several folks said it tasted like scotch), and Makers 46, which they have been making for a few years.  It is a little smoother tasting because of the added wood they put in the barrel.

Makers Mark is known for their signature hand dipped wax bottles.  After the tour is done, they do let you dip your own bottle that you purchase.  The below photo is from last year when we did this tour.  However, last year, they were shut down for cleaning, so we did not get to see the whole process, so we came back this year. 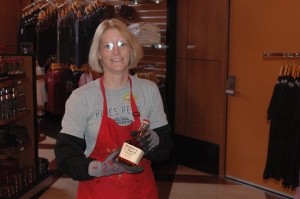 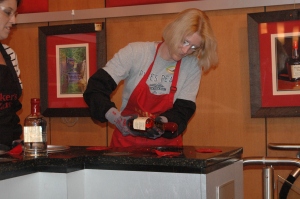 After Makers Mark, we headed to the Limestone Branch Distillery, in Lebanon, KY.  This is a new micro distillery that started in 2010.  Their entire operation is in one building.  The tour is free, and consists of going into the distillery, then going back out into the tasting area/gift shop.  Unlike Makers Mark which takes about 2 hours, this was 20 minutes!  This distillery was started by Steve and Paul Beam, and yes they are related to Jim Beam.  Cousins, I believe.

A micro-distillery. This is the entire operation!

The fermentation barrels hold 80 gallons, unlike the 1100 gallon barrels at Makers Mark.

We were the only people on the tour, a bonus of going to a micro-distillery.  They distill small batches of whiskey, in this 150 gallon copper pot still. 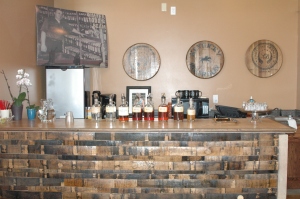 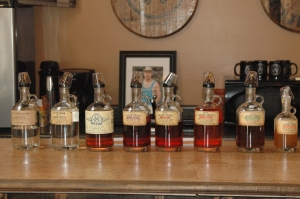 Right now, they do not have any bourbon whiskey at this distillery.  By law, it must age a minimum of 2 years, and it will be late this year when the first barrel will be ready to taste.  They have “moonshine”, a sweet-shine, which is whiskey with sugar added, and they had several very tasty flavored whiskeys, including a seasonal pumpkin whiskey.   This place is only 9 miles from Makers Mark, so it is well worth the drive to do both together.  It was very interesting to see how the product is made.  And with the smaller distillery, you get a more personalized tour.

Quote for the day:  “Always carry a flagon of whiskey in case of snakebite and furthermore always carry a small snake” – W.C. Fields

6 thoughts on “Day off at the Distillery’s”