Last week we had a wonderful time visiting with Forrest and Mary, whom we met in Cedar Key, Florida.  They are from Wisconsin, and are slowly making their way out to the Southwest, for the winter.  We all managed to get many things off our ”bucket list” during their visit.  Hopefully I can start getting caught up on my blogs, as I am very behind due to the lack of reliable internet.

Jewel Cave was discovered around 1900 by two brothers, Frank and Albert Michaud, and their friend Charles Bush, when they heard some wind blowing into a hole in some rocks.  They discovered a cave full of sparkling calcite crystals, and made a claim to this “jewel mine.”  Soon they realized there were no valuable minerals in the cave, and turned it in to a tourist destination instead.  Since “calcite crystal cave” doesn’t sound too exciting, they named the cave Jewel Cave.  The National Park Service took over the cave in 1908 which has protected the cave. 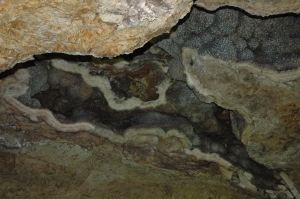 They offer four different cave tours, and we opted for the Scenic Tour, which is the most popular of the tours (and free with our VIP pass).  At $12.00, it is an excellent value.  The tour covers about 1/2 mile of the cave, in 1 hour and 20 minutes.  You take an elevator down into the cave, and there are about 700 stairs to climb up/down.  Of all the cave tours we have been on so far (still have several others to blog about), this would be the best tour for anyone who is claustrophobic, as this is a very wide open, cavernous cave.

Photography inside a cave is hard to do, because of the lighting, and lack of depth perception in photographs.  To get an idea of the size of this cave, you can see the stairs in the photo below, showing how far down we will be going.

And then back up again to another area of the cave..

up through a narrow passage

Into a larger room of the cave. 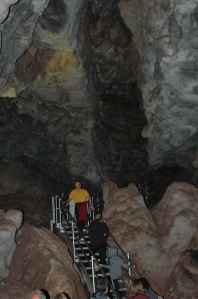 This cave has several interesting formations.  I thought this piece of flowstone looked like a brain.

They call this very thin piece a soda straw. 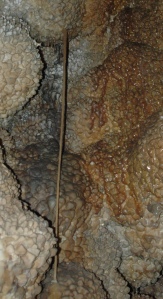 Curved pieces of calcite on inclined walls and ceilings create these interesting “curtains”.

This piece of “bacon” is over 20 feet long.  It is also formed from calcite, but has magnesium in it as well, which provides the coloring.  This was our favorite formation in the cave.  Again, the photograph does not display the enormity and full color of this piece of “bacon”. 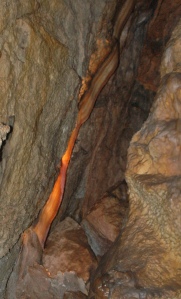 Jewel Cave is well worth the visit if you are in the Black Hills.  It is estimated that only 5% of Jewel Cave has been discovered, based on barometric pressure readings of the cave.  Future generations will be able to continue enjoying new discoveries for years to come.  Many visitors inquire about which cave to visit, Jewel Cave, or Wind Cave.  If you have the time, I would recommend both, as they are very different.  If you are short on time, or a bit claustrophobic, then stick with Jewel Cave.  And in our opinion, the National Park Service has done an excellent job in taking care of and preserving both of these caves.

Quote for the day:  “In the United States the best of our national scenery and our most interesting scientific and historic places are retained in public ownership, for the benefit and use of all people.” – Isabelle F. Story