First off, a special thanks to blog readers Jim P. and Wayne W. who replied on my last blog that this building is a VOR Station, allowing aircraft to use their radio beams to navigate throughout the US.  Always good to learn something new every day! 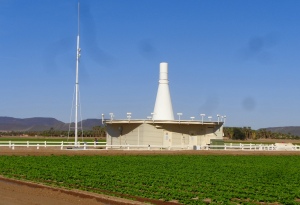 About 30 miles northeast of Yuma is the United States Army Yuma Proving Grounds (YPG), which covers 1300 square miles of the Sonoran Desert.  General Motors also operates a test track on the grounds, and permits the Army to test their vehicles on the tracks that GM built, at no cost to the government.  You can visit parts of the YPG, but not the GM facility.  If you do go to YPG, you must have photo identification, proof of vehicle insurance, and current vehicle registration of the vehicle that you are driving, in order to get onto the grounds where the free Heritage Center museum is located.

There is a nice display of weapons that have been tested at YPG since WWII, outside of the facility.  Some have been put into military use, and others discarded as not acceptable.

The facility has a long history, going back to World War II, when the Army trained over one million men and women out in the desert to prepare for combat. General Patton was instrumental in getting this training facility started. He felt this would be an excellent area to prepare the troops for WWII.  The museum has an interesting movie about the WWII training experience, including many first-hand recollections from WWII veterans.

The grounds are still in use today for combat training.  When you drive around in the area, you can see small makeshift cities that our troops continue to train in, to simulate desert conditions in the Middle East.

The museum has displays of what the base was like in the 1940s and 50s.  At the time, these were state of the art technology.  Looking at this telephone, we all started going “one ringy dingy, two ringy dingy” at the same time! (you need to be over 45 to get that) 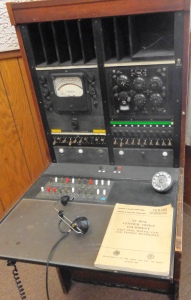 When testing equipment, it’s is crucial to document and record the test, which is where this Film Processing Machine came into use.

This camera has been in use since 1944 to record rocket testing.

YPG is testing items for the modern-day soldier, including this cooling vest that serves as a base layer, and the night vision goggles.

A lot of ammunition gets tested out in the desert, and we could hear a lot of “booms” going off as we walked around on the premises. 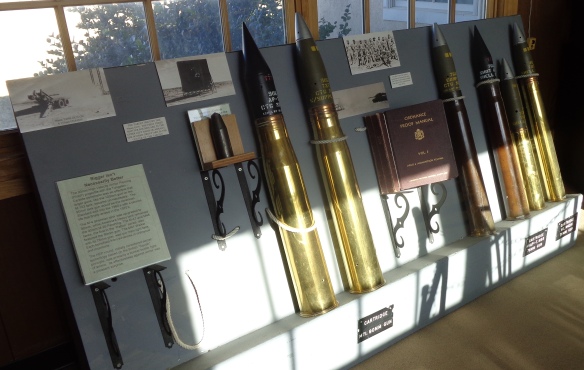 The YPG is also a major testing/training area for parachuting, including high-altitude jumps.  They had one very famous visitor to the area, when former President George H.W. Bush decided to jump out of an airplane at the young age of 72.   The museum has framed a copy of the autographed newspaper on the wall.

Quote for the day:  “Whoever said the pen is mightier than the sword obviously never encountered automatic weapons.” – Douglas MacArthur

We do try to have a “play day” with our friends Dave and Marilyn, that live in Yuma, and see various sites in the area.  Dave was trying to find something new to show us, but we got off track and ended up at the Imperial Date Gardens, in Bard, California.  Little did he know this was actually a place that I wanted to see.  I love dates, Dan, not so much. 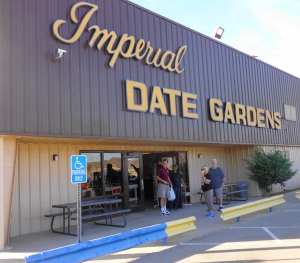 The place does offer tours, but since we just happened upon the place, it was not on a tour day.  No one was at the place, but one of the workers took the time to come outside and talk about the date palm trees.  In a very short time, I learned more about dates and palm trees than I thought possible!  It was very interesting, and growing/harvesting dates is a very labor intensive process.  Imperial Date Gardens specializes in the Medjool Date, because, as the manager honestly pointed out, it has the highest profit margin!  They also taste great.  To buy them right at the plant, was very cheap.  I was able to get a pound of extra fancy medjool dates for $5.75.  I should have bought more, as they are double and triple that price in the local stores. 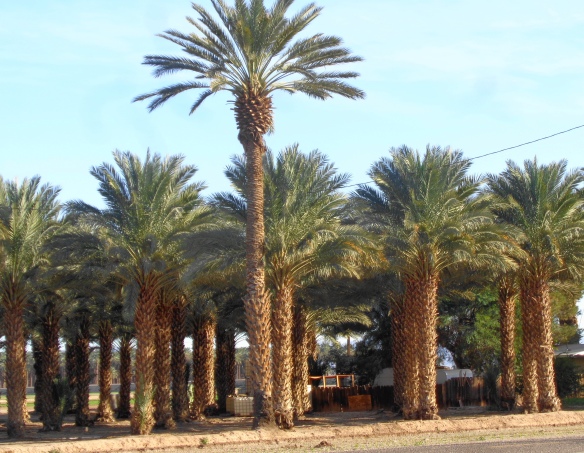 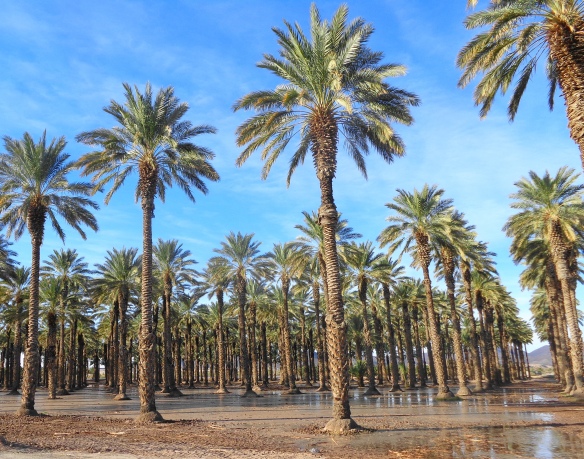 The male trees and female trees are kept in different areas.  If you stare at the two pictures long enough, you will see the difference between the sex of the tree.  Once a month, they flood the fields to provide water for the tree.  The harvest starts in August, and can go as late as October.

Because Yuma has over 300 days of sunshine a year, it is a major agricultural area.  Acres upon acres of produce is grown here, and sold throughout the United States.  It is interesting driving around the Yuma area to see the lush green fields surrounded by desert brown roads.  If you check the origin of your winter produce, much of it will come from this area.

Dave has noticed this white buildings all over the country.  We spotted one in the Yuma area.  We have no idea what it is, other than a government facility of some sort.   We tried to get closer, but there was enough Warning: No Trespassing signs to keep us away.  It is surrounded by acres of romaine lettuce fields.  If you know what this if, let me know.

Sometimes it’s okay to just wander and get lost.  You never know what you will find.

Quote for the day:  “Our happiest moments as tourists always seem to come when we stumble upon one thing while in pursuit of something else.” – Lawrence Block