Dan and I have always had a fascination with the Space program, so we stopped in at The U.S. Space Walk of Fame Museum in Titusville, after we finished our bird tour at Merritt Island.  The museum, which has free admission (yea!), is crammed full of memorabilia from the Mercury, Gemini, Apollo and Shuttle missions.  Currently, the museum is in an old building, and is literally bursting at the seams.  In talking with the volunteer on duty, they just signed a lease for a new building, that will have about 7,000 square feet of exhibit space, compared with the 1400 square feet they have now.

Many of the items have been donated by employees from the space center, as well as the astronauts.  While we were there, a woman came in inquiring about donating memorabilia her father received while working at the space center in the 60’s and 70’s.   They were very eager to receive her late father’s collection, and she was happy it would be enjoyed by the public for years to come.

Below is a photo of the recovery suit worn by Virgil “Gus” Grissom after the Gemini 3 flight.  Grissom was the 2nd American to fly in space.  He was set to command the first manned Apollo mission, but was tragically killed when fire erupted in his spacecraft on the Launchpad in a training mission on January 27, 1967.  Crewmates Edward White II and Roger Chaffee were also killed.

This is the hatch and frame that was recovered from Mercury Capsule #4.  This was a suborbital flight, by Gus Grissom, that lasted about 15 minutes and was uneventful until splashdown, when the hatch cover blew.  Grissom was saved from drowning, and the capsule sank into the Atlantic Ocean.  It was recovered in 1999.

NASA used a high-speed camera (pictured below), capable of taking 4,000 photos per minute, to check rocket and missile engine performance during tests and during lift-off of the rockets at the space center.  The camera was attached to a drive motor below the camera, and is about 3 feet tall with the motor attached. 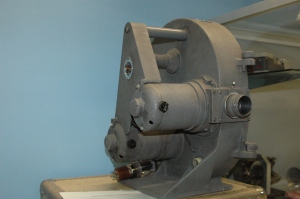 They had a nice model of the space shuttle on the launch assembly pad.

This museum had a lot of interesting facts and figures for the math geeks.

lots of math involved in the space program!

And even something of interest for radiology geeks!  The lunar EVA spacesuit boots that Neal Armstrong left on the moon were x-rayed on July 7,1969, 9 days before the launch of Apollo 11.  The radiograph was done to insure there were no foreign objects in the boots which could compromise the integrity of the spacesuit.

The Space Center has it’s own fire department, and they had several displays in their honor. 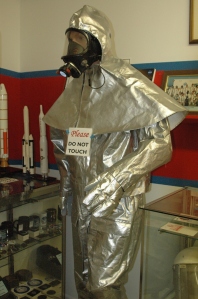 fire fighter suit in the 60’s

The museum had a tribute to the crews of the 2 Space Shuttle missions that tragically ended.  The Space Shuttle Challenger blew up just 73 seconds after the launch on January 28, 1986.  I remember hearing about this during a Physics class in college (UW – Eau Claire).  Our professor was visibly upset and released class early and we all went over to a cafeteria to watch the news on television.  (life before the internet, where we had to ‘wait’ for news!) Dan was doing his student teaching in Marshfield, Wisconsin when word came in during an algebra II class. This shuttle launch was one of the most widely viewed live space events, because Christa McAuliffe, was on board.  She would have been the first teacher in space.  The space shuttle program was grounded for 3 years after this catastrophe.

On February 1, 2003, all seven members of the Space Shuttle Columbia crew perished when their shuttle disintegrated upon re-entry into the Earth’s atmosphere over Texas and Louisiana.  Again the shuttle program was put on hold for 2 years.

The photo below is a giant rotary dial phone used in the control rooms.  It’s hard to tell from the photo, but it is about 8 inches high by 10 inches wide.  Amazing how much technology has shrunk the size of phones today! 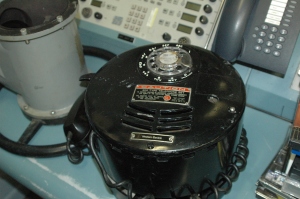 NASA used these giant Lithium Chloride Batteries on 3 Titan missile missions.  One battery has a 250 amp hour capacity, and was the first lithium battery used of this capacity.

The photo below shows a mission control room, and the museum has on display several of the actual control panels from this room.

Overall, we enjoyed this museum, even though it is in very cramped quarters.  We were the only 2 people visiting at the time.  We look forward to coming again some day, after they move into their new building.

Quote for the day: “Looking down the road, space exploration and the benefits it yields – in medicine and information technology – should not be overlooked.” – Bob Barr