Wednesday turned out to be a pretty nice day, low 70’s, so we decided to complete the final to stops on the Kentucky Bourbon Trail.  We started at Heavens Hill, in Bardstown, KY.  We had been here before, so we did skip the tour, but got our passport stamped.  Their visitors center has a lot of interesting information on the history of bourbon.

Heaven Hill had a huge fire several years ago that destroyed over a dozen warehouses.   As with all the distillery’s, the warehouses are spaced pretty far apart, but once several thousand barrels of bourbon starts on fire, there isn’t much anyone can do to contain it.

Below is an example of a copper pot that was used in the past by moonshiners.

Heaven Hill has on display many historical photographs from the days of Prohibition.

Heaven Hill was founded by William Heavenhill.  It is believed that a typists error on the distillers permit put a space in between Heaven and hill, and the company could not afford the fee to have it corrected, so it was left as two words.  Their main brands of bourbon are Elijah Craig and Evan Williams.  Elijah Craig is considered the “father” of bourbon, as he was a minister, and was the first person to char the barrels that the whiskey is placed in for aging.  Evan Williams was Kentucky’s first commercial distiller, rolling out the first barrel in 1783.

After Heaven Hill, we headed to our final stop on the tour, Jim Beam, in Clermont, KY.  Beam is considered to be the number one bourbon distillery by volume.  We had also done their tour last year, but they completely revamped it, and built a brand new visitors center for 2013, so we decided to go on their tour.  At $10, it was the most expensive of the tours.  They had to raise the price of their tour because so many people were stealing their tasting glasses, that they now give them as a “complimentary” gift!  Also on our tour was a number of students from the national Future Farmers of America (FFA) convention that is going on in Louisville.  You don’t have to be 21 to go on the tour, only to sample the product.  It was good to see the students learning about the importance of the grains.  After all, they could be the future farmers providing these important ingredients. 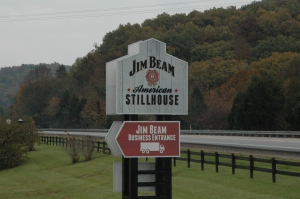 The tour this year was very interactive and informative.  This is the new visitors center: 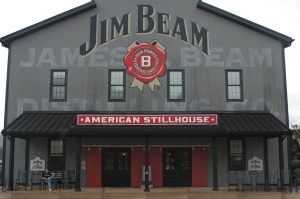 lounging on the rocking chair

The tour starts out by going over a small-scale example of a distillery, and then goes into the main plant to see their operations.  During the tour, visitors have an opportunity to fill a barrel, dump a barrel, and rinse out bottles. 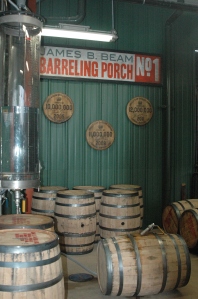 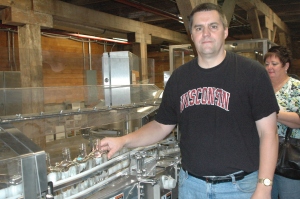 placing it on the filling line 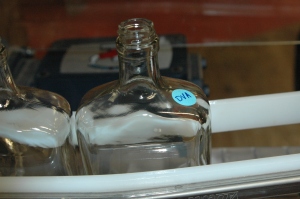 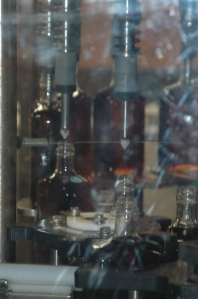 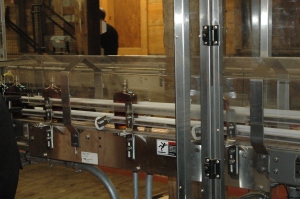 Unlike Makers Mark, they don’t let you dip your own bottles. 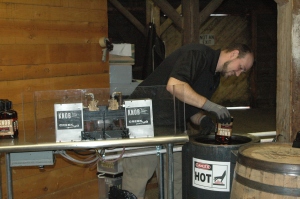 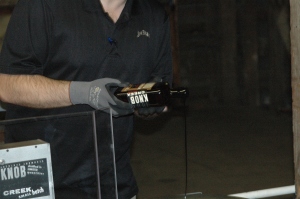 Now if anyone wants to join us in the “sampling”, come on down to Kentucky!  We’ll be here until December 24th!.  Continuing on with our tour, we went into one of the barrel warehouses. 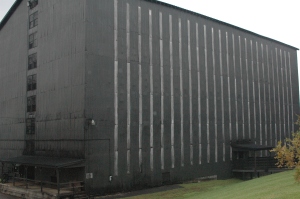 Jim Beam has two warehouses that sit on either side of a Baptist Church.

Jim Beam also has a huge display of souvenir containers that actually contained their bourbon and was given out as gift items. 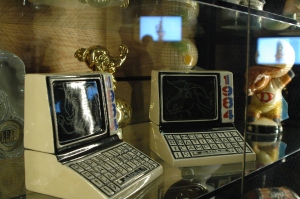 This is part of their copper pots.  They have one above ground, and one below ground in a blast proof container. 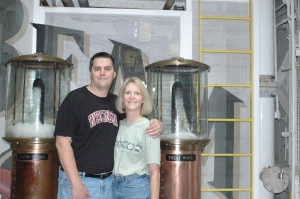 Final stop on the tour was the tasting room.  They give you a plastic card that you insert into the machine below, and it dispenses two small samples of your choice.

And now onto our favorites.  We both enjoyed the Woodford Reserve the best, as a good sipping whiskey.  Makers Mark was also good, but the triple distilling at Woodford made their whiskey a bit smoother.  The regular Jim Beam or the Four Roses yellow label would be good for all the recipes that call for bourbon in the ingredients.

As far as tours goes, again we felt the Woodford Reserve tour was the best, followed by both Makers Mark and Jim Beam.  If you are in the Kentucky area for a week or so, the Bourbon Trail is a fun thing to do.  Except for two, the distillery’s are 20 – 50 miles apart, so this is not something that could be easily done in a weekend.

Quote for the day: “Whiskey is by far the most popular of all remedies that won’t cure a cold.” – Jerry Vale

Thursday was a bit rainy, so we decided to just go and visit some more distilleries.  There are seven major distilleries that are a part of the Bourbon Trail.  You get a passport that lists each one, and when you visit the distillery, you get your passport stamped.  Once you have visited all seven locations, then you can turn the passport in for a “free” t-shirt (not factoring in the cost of gas and admission fees for the tours!)

We did four distilleries on Thursday, but due to painfully slow internet service today at the park, I will only discuss the first two. It is simply taking forever to upload photos.   I will do a follow-up post with the second ones, which also included a craft brewery.  The park is again sold out, and they are gearing up for Halloween this weekend.  We are stocked up on candy for the kids (did not find any boxes of Dots though…bummer!)

Our fist stop was Four Roses Bourbon, in Lawrenceburg, KY.  The tour is free. The distillery, built in 1910, is of Spanish Mission-style architecture and is on the National Register of Historic Places.  They are the only distillery that uses single-story rack warehouses, so they do not have to rotate barrels and the barrels are not subject to temperature variances like the barrels in multi-story buildings are.  Given the age of the distillery, it was very cramped for a large tour group, but nice to see they are still using equipment that is older than I am. We were able to sample a single barrel bottle, small batch bottle and the Four Roses Yellow, which they recommend for mixed drinks. The Yellow label was good. 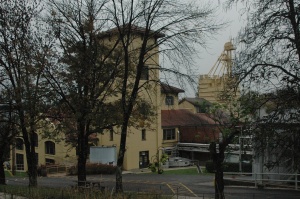 Our second stop was at Wild Turkey, also in Lawrenceburg. Cost of their tour is $5.00. They are situated on over 900 acres. Wild Turkey recently created a new distillery and bottling plant in 2010. By volume, they produce the 2nd most whiskey in the world. It was a very industrial-feeling tour, unlike the other distilleries. Very clean and modern, most everything is now run by computers. We were able to sample several different types of their bourbon whiskeys. Personally, I did not like any of them. I thought they were too harsh tasting.

They have a big barrel in their fermentation room for photo ops.  Even with all the new modern equipment, the distillery still shuts down in July and August, because they are not able to keep the temperature in this room below 90 degrees.  The temperature of the yeast must stay under 90 degrees or it will spoil the whole batch.  You can see the vats behind us. 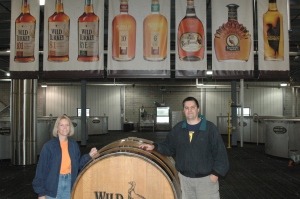 Everything in the tour at Wild Turkey was behind glass, so the indoor pictures didn’t turn out too well.  Every day the master distillers sample their product in this room.  They can only sample for 15 minutes at a time, or else their taste buds get over saturated.

Look for part two of our day coming soon!  Hope everyone has a great weekend!  Back to work for us tomorrow!

Quote for the day:  “He was a wise man who invented beer” – Plato