My friend Angie and her co-worker Brenda took an extended weekend to drive from Wisconsin to the Black Hills to see Mt. Rushmore, and participate in the 10K Crazy Horse Volksmarch. This was a ‘bucket list’ item for Brenda. They arrived on Friday, June 6, about the same time the fog rolled in for the weekend!

We headed off to “see” Mount Rushmore National Park, in Keystone. Admission to the park is free, but there is an $11.00 fee for a parking pass, which is good for the entire year. Dan and I plan on returning to the park, and I will have a more detailed blog on Mount Rushmore at a later date.

When we arrived it was misty and a thick blanket of fog covered up the Black Hills. The entrance to the park takes you through the Avenue of Flags, which has a flag for every state, in alphabetical order. On a clear day, you can see the Presidents in the background.

Avenue of the Flags

The fog in the Black Hills comes and goes, so we decided to check out the small museum and watch a short film on the making of Mount Rushmore, while waiting to see if the fog would lighten up. 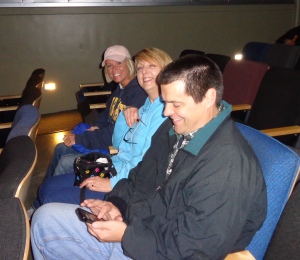 And as luck would have it, the fog lifted enough to see George, Tom, Teddie and Abe!

After that, we went back to Hill City and had a nice dinner at the famous Alpine Inn, which offers two choices for dinner: a 6 ounce bacon wrapped tenderloin or a 9 ounce one.

On Saturday, Brenda, Angie and I met up at Crazy Horse to participate in the annual Volksmarch, which is held annually the first full weekend of June. Crazy Horse also hosts another Volksmarch in late September, during the annual Buffalo round-up at Custer State Park. The Black Hills Volkssport Association organizes the event. The walk is a 10K (6.2 miles) that goes through the woods around Crazy Horse, up to the top of the arm, and then back down with the finish line at the Visitors Center. 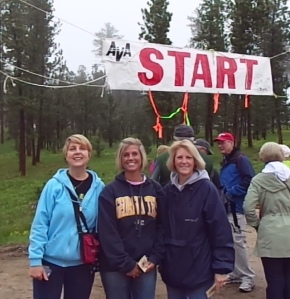 The terrain in some spots was a bit challenging, but even with the fog, the scenery was nice. 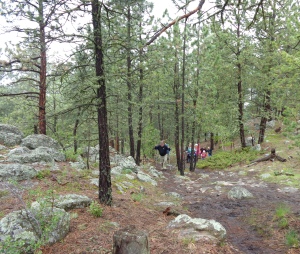 many hills to climb 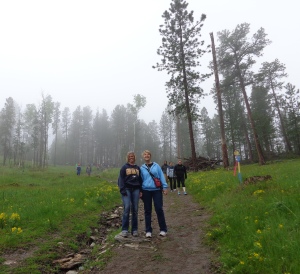 The AT&T cellular “tree” was mixed in to the woods. (Now if Verizon would just put a branch on this, we could get service out here!)

After an hour of walking, we got our first glimpse of the mountain. 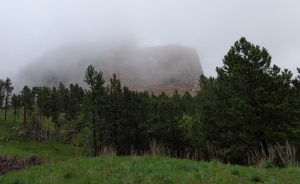 A short while later, we were making it around to the back of the mountain.

The top is finally near! 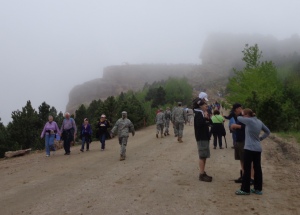 Congratulations Angie and Brenda!! Another check mark on the bucket list!! And the fog cleared for a few minutes at the top…..

the fog is back

We began our descent to the bottom, going past the tunnel under the arm.

tunnel under the arm

And on to the finish line!! 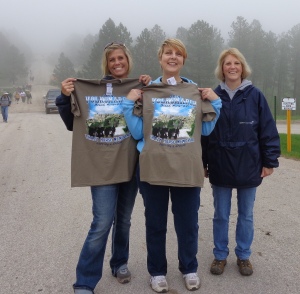 If you are interested in seeing more photos of the view from the top of Crazy Horse, please check out our prior blog post from our orientation day when we took a van ride to the top (click here).

After we finished, I headed back to the camper, as Dan and I had to work from 2pm to close, and Angie and Brenda continued exploring the Black Hills. It was a short, but very enjoyable visit with Angie and Brenda. By late Sunday afternoon, the fog finally lifted, but they had already began the drive back to Wisconsin.

Quote for the day: “Life isn’t about waiting for the storm to pass, it’s about learning to dance in the rain.” – Vivian Green