During our Sturgis visit, we spent about 45 minutes touring the Sturgis Motorcycle Museum.  During the rally, admission to the museum is $10.00, free with our VIP pass.  There are 2 levels of exhibits to the museum, and covers a brief history of motorcycles and the history of the Sturgis Rally. 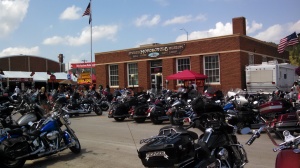 They have several dozen motorcycles on display, including many brands that we never heard of.  In 1938, Indian Motorcycle Dealer J.C. “Pappy” Hoel and the Jackpine Gypsies Motorcycle Club held the first races in Sturgis.  This became the basis for starting the Sturgis Rally in August.  This is a 1938 Indian Chief.

Here are some earlier models of the Indian motorcycles: 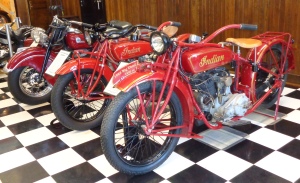 In 1914 Harley Davidson started sponsoring motorcycle racing, and hired engineers with racing experience to come up with this “speedster”

The Flying Merkel was known as one of the fastest racing bikes in its time. 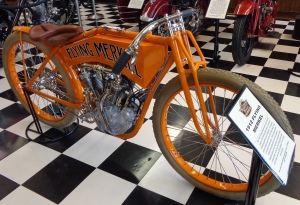 This chopper was built by OCC Choppers Paul Tuetel, and is supposed to mimic BIC’s Flex 4 razor (or so the sign says!) 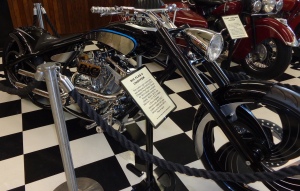 Many motorcycles from other countries are on display as well. 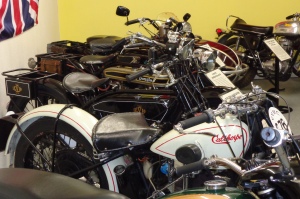 lots of other brands

In 1949, the Indian motorcycle company tried to go with a more European style, to compete with the many imported motorcycles that were gaining popularity in the US. 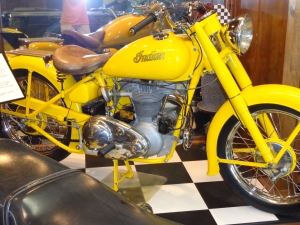 This motorcycle was designed specifically for London’s fog and rain.  It can hold up to 4 people, and keep the riders relatively dry, due to the larger windshield and lower leg fairings.

Perhaps this is why people enjoy riding motorcycles so much?

Quote for the day:  “Only a biker knows why a dog sticks his head out of a car window.” – author unknown