With temperatures staying above 100 degrees for an extended time, it was finally time to leave Yuma, Arizona, and head to cooler weather, while we wait for the Canadian border to open.  Our air conditioner on our truck camper was running all day, trying to keep up with the heat.  Yes, it’s a dry heat, but it’s still hot!

This forecast looked much better to us, so off we went to Moran, Wyoming.

We left on May 2nd, and planned on taking a few days to get to Moran, but at our first stop in Utah, we discovered that our refrigerator would not work on the propane setting.  So we continued on, planning on staying at a campground for the night, with hook-ups, so we could try to run the refrigerator on electric.  As we approached the town, we noticed lightning to the West.  After checking the radar, which was a big red blob, and reading the special weather bulletin indicating 40 mph winds and pea size hail were coming, we just decided to continue North to get ahead of the storm.  Dan ended up driving around 600 miles that day, and we stayed overnight at a Wal-Mart for the first time ever.  With the store closing at 9 pm, it was very quiet.  Since it would be in the 30’s at night, we were not too concerned about the refrigerator getting too warm.

We were able to participate in a Zoom call with my brothers and sisters while we were driving.  It was a lot of fun catching up with everyone, and hopefully my brother Jerry will be able to attend the next one. 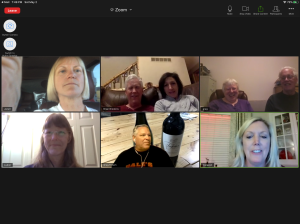 We have also been doing Zoom calls with Dan’s family as well. 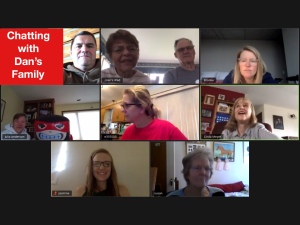 When we arrived at Luton’s Teton Cabins in Moran, Wyoming, Brad and Joanne (the owners) had a cabin all set for us.  We have worked for them the past four summers, and they graciously offered us a cabin to stay in, so we didn’t have to spend so much time in our tiny camper.  It’s not as well insulated as our fifth wheel was.  We were able to park and unload our stuff.  Makena was absolutely thrilled to have a big space to run around in, and I’m enjoying having a dishwasher! 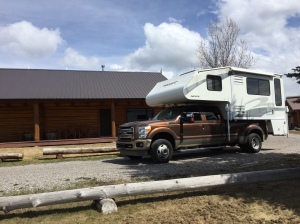 This is our view from the cabin.

When we arrived on Sunday the 3rd, the State of Wyoming was still requiring all visitors to do a 14-day self quarantine.  That order expired the next day, but with the parks and almost all stores closed, there was really nowhere to go.

When we did venture out on Wednesday, we had to be very careful of the Elk.  Without visitors bothering them, the Elk have taken over!  We have never, in four years, seen so many Elk.  The park closures have been good for the wildlife. 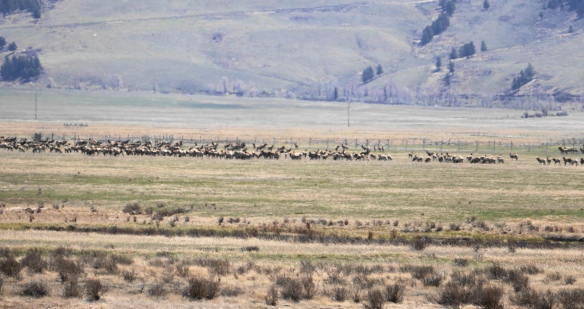 Of course, this was a little too close!

We took Makena for her annual veterinarian visit in Jackson.  You are not allowed into the building.  You have to call them, and then they come out to get your pet.  Everything went well, and once you give them your credit card over the phone, they return your pet.  I felt like she was being held hostage!  You give us “X” amount of money, and we’ll bring your dog out to the car!

After her visit, we went to the grocery store.  Last year the city of Jackson banned plastic bags, so we were curious to see if that ban was still in place, as we had heard some grocery stores were not allowing people to bring in their own bags anymore.  But the ban is still in place, and you need to bring in your own bags, as well as bag your own groceries.  They have stopped bagging them for you.

We were also happy to see that close to 100% of the people in the store (employees and customers) were wearing a mask.  In Yuma, it was about 80%, so it’s nice to see everyone doing their part to keep others safe.  Our friend Ellen made us some masks, and we have been wearing those when shopping. We needed to go to three other stores before finding two bus fuses for our RV refrigerator. Our fridge is now running again!

Over the past week, the non-essential stores in Jackson have started to re-open, as the Wyoming closure orders have gradually been lifted this week.  As of today, you can now have a gathering of up to 25 people, with churches, funeral homes and livestock auctions exempted.  That limit is set to expire at the end of the month.  The two bookstores and a toy store have both stated they will remain closed (online orders only) as they are a “high touch” store and haven’t come up with a plan to keep everything sanitized.  And a shoe store said they will only allow two people in at a time, so they can sanitize the shoes that people try on, but don’t purchase.  Other stores and restaurants said they are going to wait until the summer before re-opening.

We have just been hanging out in the cabin, watching movies through Amazon Prime on our iPad.  But then everything changed on the afternoon of the 13th, when they announced that Yellowstone and Grand Teton National Park would be re-opening, on a limited basis, starting Monday, May 18th at noon.

Brad and Joanne knocked on our cabin door, and Brad said we need you to start work in the office tomorrow, and work every day for the next week!  Apparently as soon as word got out about the parks, the telephone was ringing off the hook!  Up until then, he had been getting nothing but cancellations for this summer.  Some people did reschedule for next year.  Although we are still getting some cancellations, we are now getting a lot of new bookings.

With Yellowstone, the only entrances that will be opened up initially are the two in Wyoming.  The other three entrances are in Montana, and they still have a 14-day quarantine for visitors (as well as Idaho, which is only a few miles from the West entrance.)

Dan has also gone back to work in housekeeping.  Mitch and Amanda, who we have worked with the past two summers, have returned again.  They did spring cleaning on a few cabins so they will be ready for visitors next week.  As with all businesses, Brad and Joanne are starting to implement a lot of changes as a result of the virus.  It’s going to be an interesting summer for everyone.

We are trying to remain optimistic that we will be able to go to Alaska.  Canada and the United States first agreed to shut the border around March 21 for 30 days.  They extended the closure in April for an additional 30 days.  That closure is set to expire on May 21, but from what we have been reading, Canada is pushing for another 30 day extension.  Canada has done a good job in controlling the spread of Covid-19 with extensive shutdowns, testing, and contract tracing.  It’s certainly understandable that they want to keep their people safe.  And we want all of our Canadian friends to stay safe!

So for now, we wait.  Al and Karen should be arriving here next week, and then we will decide on our plans.  If we don’t end up going to Alaska, Brad asked if we could stay and work for the summer, and we may decide to do that.  But we would rather be headed North.

Quote for the Day: “Have patience.  All things are difficult before they come easy.” – Saadi