Yesterday we went to Blue Spring State Park right here in Orange City.  During the winter months (is it really winter when the temperature is in the 80’s?), the park is home to over 200 manatees that come into the Blue Spring Run, off the St. John’s River.  The natural springs allow the river to stay at a constant 72 degrees year round. Unlike the springs over in Crystal River, you are not allowed to enter the water when the manatees are around.  They do offer kayak rentals, and there is a river cruise that you can take, but the area containing the manatees is blocked off.

The park is 2,643 acres and has a nice 51 site campground.  In 1856, Louis Thursby arrived from New York and purchased the property.  He was a gold prospector, but discovered acres of orange trees and became the areas largest orange grower.  He built a three-story house on the grounds, and that house has been preserved and is open to the public.  It does not contain any furnishings.

Before the railroad was constructed in this area, mail, supplies and tourists arrived by steamboats at this property.  The Thursby’s and their children thrived on this tourist activity.  Once the railroad came through the area, steamboats all but disappeared and the family moved to another house in Orange City.

In 1971, an episode of the Underwater World of Jacques Cousteau, entitled “The Forgotten Mermaids” was filmed on this property.  Cousteau was instrumental in protecting both the manatees and their winter habitat.  Florida purchased the land after the documentary, and has worked on restoring the property back to its natural habitat.  There are many species of birds and fish that can be found in the park.

But the manatees are the main attraction and dozens can be seen floating under the water below: 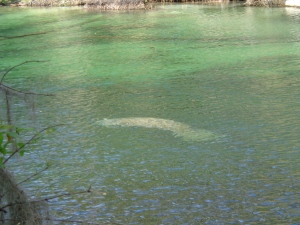 The only manatee you can touch in the park!

There were also dozens of tilapia that were spawning.  It was interesting to watch.  The females use their fins and spin around in a circle digging a small hole, then deposit their eggs.  Then they hover over the hole, and chase off all the other fish that try to get at the eggs. 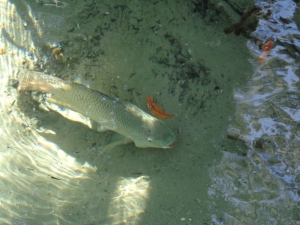 circles made by the fish

The park has a nice boardwalk that you can walk along down the spring, to the area containing an underwater cave.  Only scuba divers certified in cave diving are allowed to enter this area.  This is the source of the spring that discharges over 100 million gallons of water every day into the St. Johns River.  The water was crystal clear, no wonder so many species of fish and the manatees love to “winter” here!

After we left the park, we headed over to visit Dan’s parents in New Smyrna Beach.  We noticed the Goodyear Blimp was flying down the coast.  As it turns out, this particular blimp, Spirit of Goodyear, is making its final flight this Sunday, at the Daytona 500.

Goodyear has 3 blimps currently in service.  Two are based out of California, and this one is based out of Akron, Ohio.  The “Spirit” blimp has been in service for 14 years.  There will be 2 blimps at the race on Sunday, and this one will be disassembled after the start of the race.  So of course I had to look into some “fun facts” on the blimp.  The blimp is 192 feet long, 50 feet wide and 59.5 feet tall.  It has a cruising speed of 30 mph, and a top speed of 50 mph.  There is no bathroom on the blimp.

Goodyear will be replacing this blimp with a new model that has more passenger capacity, and better technology.  The blimp covered its first event in 1955, the Rose Bowl parade and football game.  But they were first put into service in the 1920’s, and patrolled America’s coasts during WWII.

And if you think about it, the blimp “pioneered” the world of social media, with its LED sign broadcasting messages during the events it covered!

Quote for the Day: “The truth is you don’t know what is going to happen tomorrow.  Life is a crazy ride, and nothing is guaranteed. ” – Marshall Mathers, aka Eminem